This month marks the centenary of the landing at Gallipoli by Australian and New Zealand troops as part of a larger allied invasion force in April 1915.

The strategy for the campaign was simple: have troops land at a number of points along the Gallipoli Peninsula and secure the strategic waterway of the Dardanelles for France and Great Britain. It was hoped this invasion would force Turkey out of the war and open the maritime passage to the Black Sea from the Mediterranean so the Western allies could supply the armies of imperial Russia in the fight on the Eastern Front against Germany and the Austro-Hungarian Empire.

The campaign failed to achieve any of the initial objectives and the invaders clung to a number of toeholds on the peninsula until December 1915 when it was decided that, as there was no prospect of victory, the best option was to withdraw all troops from Gallipoli and redeploy them in other theatres of war.

Although a defeat, the Gallipoli campaign has become mythic for both Australia and New Zealand. Much has been written about the significance of Gallipoli for the two nations. In particular, the landing on April 25, 1915 has been called Australia’s “baptism of fire”, referring to the country’s first experience of battle in World War I. Captain I. Margetts even used the term in his diary for April 25 to describe the landing at Gallipoli.

Historians have noted how the Australian involvement at Gallipoli gained Australia the right to be treated as an independent nation. Thus, Australia was allowed its own independent seat at the Paris Peace Conference in 1919 and was not simply part of the British Empire delegation.

However, Gallipoli was also a baptism in blood. Within two months of the landing the number of casualties had risen close to 10,000 – a quarter of them deaths. The reality of war and loss was not just the experience of service personnel, for the growing casualty lists impacted more and more families and communities throughout Australia as the Gallipoli campaign dragged on through 1915.

There will be understandable focus on the meaning of Gallipoli for Australia as a nation in this centenary year but it is also important to remember the numerous individual Australians who served – and especially those who died, not only at Gallipoli, but also in other theatres of World War I.

As the honour rolls/memorial boards in older parishes indicate, many from the Diocese of Sydney joined up to do their bit.

Robert Linder’s The Long Tragedy: Australian Evangelical Christians and the Great War, 1914-1918 notes the large number of men from the parishes who enlisted. As it is not possible to detail each Sydney Anglican who served at Gallipoli, the story of two individuals who did so will represent all those from the Diocese who went. 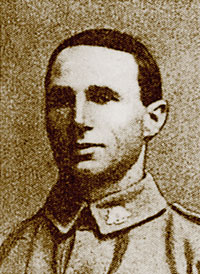 Spencer Maxted was the rector of St Oswald’s, Haberfield when the war broke out in August 1914. He tried to volunteer for service with the Australian forces as a chaplain but, as the quota for chaplains was quickly filled, instead enlisted as a soldier in the Australian Imperial Force in September 1914.

Maxted (pictured) was 32 years old and married with two children. He was assigned to the 1st Field Ambulance where he was a stretcher-bearer. He served at Gallipoli, was promoted to Lance Corporal and was evacuated to Alexandria because of illness in September 1915.

At Gallipoli he was a member of the Church of England congregation ministered to by the Rev A.E. Talbot, who was on leave from his role as Dean of St Andrew’s Cathedral in Sydney so that he could take up the post of senior Church of England chaplain with the AIF. Maxted assisted Talbot with communion services and Talbot recorded that he and Maxted had lengthy theological and philosophical discussions in Talbot’s dugout.

There is a very moving description of one of these services by Methodist chaplain James Green on Sunday, June 20, 1915:

“Chaplain A.E. Talbot (Church of England) had suggested a united communion service. The men gathered up in great numbers, and we began the service with the hymn ‘Rock of Ages’. I read the gospel and gave the address, Chaplain Talbot reading the service. There was deep reverence under strange circumstances. Between the opening of the hills we caught a glimpse of the beautiful sunset over Imbros. A destroyer was steaming down to her position over Gaba Tepe to guard our right flank during the night. A few enemy shells soared overhead occasionally, but unmindful of these circumstances, the men in large numbers came up to the improvised communion table fifteen at a time, and knelt to receive the emblems of salvation. As the men were coming and going the rest sang softly. The hymns were ‘Abide With Me’, ‘Hark My Soul, It Is the Lord’, ‘O God, Our Help in Ages Past’, ‘Jesu, Lover of My Soul’... they came to the communion steadily, then donned their arms and equipment for the firing line. As they sang

‘I fear no foe with Thee at hand to bless Ills have no weight and tears no bitterness
Where is death’s sting! Where grave thy victory? I triumph still if Thou abide with me’
one could not help gazing towards our burial ground on the hillside facing the sea, where so
many of our brave comrades lie sleeping.”

Maxted survived Gallipoli and was reassigned as a chaplain with the rank of Captain in January 1916. He was posted as the chaplain of the 54th Battalion and went with them to France in May 1916. His battalion was part of the 5th Division of the AIF that was involved in the ill-fated attack at Fromelles on July 19, 1916.

Much has been written about the futility of this engagement, which was meant to be a diversion for the major offensive underway in the Somme region. In a 24-hour period, the 5th Division suffered over 5500 casualties, including about 400 captured by the enemy. Spencer Maxted was one of the AIF fatalities at Fromelles. He had gone forward with his battalion and was helping the wounded when a shell burst killed him.

The Red Cross Wounded and Missing Information Bureau later collected a number of eyewitness accounts that described what had happened to Maxted. These accounts also give an indication of the regard of the men for their chaplain:

“The men all thought a great lot of him – he would come down into the line at night sometimes, have a sing-song and sometimes hymns just to help the boys... he was always down in the front line with the boys, and he need not have been. The night of the big attack at Fleurbaix he was first over the parapet with the stretcher-bearers... he was getting about amongst the wounded lads, bandaging... carrying wounded and giving water to others... someone said Capt. Hansen was wounded and he (Maxted) went through a perfect hail of fire with his bandages and water bottle... he was bandaging a wounded man when he was killed. A man among men.”

Spencer Maxted is buried at Rue Petillon Military Cemetery at Fleurbaix in the north of France. He is one of the too numerous survivors from Gallipoli who later perished in the battles of 1916-1918 and are buried in the Commonwealth War Graves Commission cemeteries on the Western Front. His headstone carries the inscription chosen by his family – A true servant of Jesus Christ. They wanted his epitaph to show that he was a man committed to the Lord Jesus and whose life was lived in serving him. A fitting epitaph for a believer!*

Another Sydney Anglican who served at Gallipoli was Private Harold Bathurst Smith. He was the youngest son (20 years old) of Sydney and Sarah Jane Smith of Pitt Street, Sydney. The Smiths also owned the Thornton Hall estate at Penrith. Sydney Smith had served in the colonial parliament and later the Commonwealth Parliament after Federation. For a time he was Postmaster-General.

Harold Smith was a member of the 18th Battalion AIF, a new unit, which arrived at Gallipoli on August 18, 1915. Four days later the battalion was involved in an attack on Hill 60.

Charles Bean, the official Australian correspondent at Anzac, was critical of such a raw battalion being used in the attack and he noted a number of deficiencies in the planning for the engagement, which made the job of the battalion incredibly difficult. The attack ended in failure with the 18th Battalion incurring severe casualties – 11 officers and 372 enlisted men, half of whom were killed.

Private Harold Smith was among the dead. Although some of his fellow soldiers recorded what had happened to Smith, his grave was never found and he is recorded on the Lone Pine Memorial along with the other soldiers who died at Gallipoli and have no known grave.

Smith’s family first received word that he was missing and it wasn’t until January 1916 that an army court of inquiry determined that he had been killed in action. In May 1917 his family finally received a death certificate, which allowed them to settle Harold’s estate. His will asked that his possessions be given to a Miss I. M. Dukes of Penrith. Among the items was a chestnut mare and foal. Miss Dukes may have been Harold’s fiancée but this is not certain.

When Harold Smith’s personal effects were returned to his family in 1918 three religious books were among the few items returned. Most often for an Anglican like Harold this included a Bible (or New Testament) and a Book of Common Prayer.

Apart from what can be deduced from his service record, not much more can be said about Harold Smith. He, like many other Sydney Anglicans, served at Gallipoli and, hopefully, was impacted by the ministry of chaplains like the Rev A. E. Talbot. Smith represents the thousands of Australian service personnel from the World War I whose names can be read on the honour boards in Anglican churches around the Diocese. Those who knew these men are no longer with us and so the names, for the most part, are simply lists that speak of the statistical impact of the war.

However, as is often stated on the graves of unknown soldiers in the war cemeteries, while they may be unknown to us they are “known unto God”. The brief biographical profiles of Harold Smith and Spencer Maxted remind us this Anzac Day of the cost of war not only for the individuals who served, but for the families and friends who lost loved ones, and for the churches from which they came. In the face of the tragedy of Gallipoli we should also remember how there were those at Anzac, both lay and clergy, who took the opportunity to minister the word of God to the troops at a time of great need.

*This article originally appeared in the April Edition of Southern Cross magazine. A book by Colin Bale, A Crowd of Witnesses: The Messages of Australian War Grave Inscriptions on the Western Front, is soon to be published by Longmedia.

Every word of God is flawless

Christians ‘horrified’ by latest IS massacre