Mardi gras marches into the light 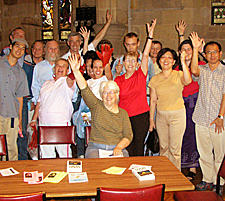 "Emmanuel at the Mardi Gras' will be a bright light amongst the superficial glitter as the Gay and Lesbian festival surrounds St Michael's, Surry Hills this weekend.

St Michael's is the only church of any denomination that the parade passes by every year.

According to the rector, the Rev Francis Chalwell, this gives the church a unique opportunity to be a Christian witness.

"As the only church on the parade route, it is important that we give people an alternative and provide a refuge for them," he says.

"We want people to come to know that Christ is real, loves them and cares for them."

Sexuality on the agenda

Mr Chalwell says the evening offers many opportunities for witnessing and gospel conversations.

"We have a lot of conversations to do with sexuality and what God and the church think about homosexuality," he says.

"Many people ask questions. We have also had some enter the church who are quite sad, saying how sorry they are for the lives they have lived and want to change."

Crowds expected in their hundreds through the church doors

The church has deployed an outreach team of 40 volunteers from St Michael’s and Wesley Mission’s Edward Eager Lodge. They will open the church, receive guests and offer hundreds of cups of coffee and tea.

Mr Chalwell says Christians will also be praying in groups for the duration of the parade as well as going into the crowds with invitations for ‘sanctuary and refuge’.

Mr Chalwell says another aim is to ensure safety is met.

"We have volunteers in the church who make sure people don't climb up the building and hurt themselves," he says.

The Rev Roger Kay, who was the rector of Surry Hills during the mid 1990s when the church’s Mardi Gras outreach was first developed, says the reason for the outreach initially grew from these safety concerns.

"The wardens wanted to protect the building from over-enthusiastic revelers, but we soon had a change of focus from protecting the church to using the building as a ministry during the parade," he says.

Mr Chalwell says the interesting name of their outreach is derived from the varied linguistic history of both titles.

"We call it Emmanuel at the Mardi Gras, because Mardi Gras is French for "Fat Tuesday' and Emmanuel is Hebrew for "God with us'."

Mr Chalwell says "we need lots of people praying' for the outreach.

"Pray for people to be kept safe. Pray for a clear presentation of the joy of the Christian lifestyle. And pray for people who enter the church that they discover the joy of following Christ and living his way."

Search for a Super Model