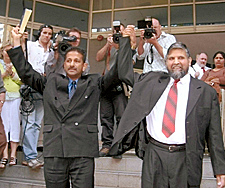 A prominant Christian convicted of vilifying Muslims says the NSW Parliament has exposed a ‘bad law’ by rejecting legislation to limit religious freedom.

Critics argued the bill, moved by Independent MP Peter Breen, was designed to restrict free speech under the guise of tolerance.

Pastor Danny Nalliah of Victoria’s Catch the Fire Ministries, who is appealing his vilification ruling in the Supreme Court, says the defeat of the bill will help church leaders fight to repeal Victoria’s controversial Racial and Religious Tolerance Act.

“Every aspect of this is going to help - I’m very glad to hear the news,” Mr Nalliah told Sydneyanglicans.net.

“This vilification [bill] has been exposed as a bad law.”

Mr Nalliah and fellow pastor Daniel Scot have refused to apologise to the Islamic Council of Victoria for comments made about Muslims, the Koran and Jihad at a church seminar in 2002.

Leader of the Christian Democratic Party, the Rev Fred Nile, expressed his relief that the Bill was defeated.

"I'm very happy that this Bill has finally been defeated. Whilst tolerance is something we all should aspire to, trying to enforce it through this legislation was going to create more problems than it sought to solve," he says.

"I embrace freedom of speech, even though most of my political life I personally have been vilified as a two dimensional caricature."

The Anti-Discrimination Amendment (Religious tolerance) Bill was soundly defeated in the NSW Upper House by 23 to 5 votes.

The Bill was introduced last September by Mr Breen, who had lobbied heavily for support on the legislation.

Mr Nile's parliamentary colleague the Rev Hon Dr Gordon Moyes offered his thanks to the thousands of Christians who petitioned NSW Parliament.

"This bill was one of the greatest threats seen in recent times to religious freedoms in this state, and Christian people were right to rally against them. It was all worth it today," he says.

Dr Moyes says the defeat of the NSW bill highlights Victoria’s "Catch the Fire Ministries'  case and the plight of the two pastors facing jail for their comments critiquing Islam.

"We also remember the two Dannys in Victoria who continue to come under legal persecution for speaking openly about religious truths," Dr Moyes says.

"Their plight has readily shown the vagueness of religious tolerance legislation is an open invitation to over-zealous judicial activism in prosecuting people of faith."

Mr Breen admitted to parliament yesterday that the judgment in the Catch the Fire case had helped scuttle his bill.

"The outcome of that case is most unfortunate and has probably done irreparable damage to the cause of religious tolerance laws," he says

"I do not believe that [Pastors Danny Scott and Danny Nalliah] deserved to be saddled with million dollar legal bills for saying what they think, no matter how misguided they might have been."

The Anti-Discrimination Amendment (Religious Tolerance) Bill had been described as poor legislation by the recently retired NSW Premier Bob Carr.

College part of the family tree

Mardi gras marches into the light