Archbishop Glenn Davies has announced a new bishop for the Georges River region, a new director of ministry training and proposed a new Diocesan Mission in a packed Presidential Address to Synod.

Synod gathered in the Wesley Theatre in Pitt Street after an opening service in St Andrew’s Cathedral, to hear the Archbishop outline a vision which includes boosting the number of newcomers at Sydney Anglican churches. (audio)

“Our vision for the next five years is to see Christ honoured as Lord in every community. That is, we want to penetrate every part of our society, every ethnic group, every tribe and tongue with the gospel of Jesus so that more and more from every part of our diocese come to put their trust in Jesus as Lord and Saviour. We have a mission, which is a matter of life and death.”

Consideration of a fresh formulation of the Diocesan mission, now titled Mission 2020, will be the centrepiece of Synod’s considerations over the next five days.

Among the mission goals is having a greater proportion of ‘newcomers’.

“Some items are always a priority, such as the need to reach the lost with the gospel of Christ.” the Archbishop said. “However, one of the more significant metrics from the 2011 National Church Life Survey (NCLS) indicates that across the Diocese we have an average of 9% of attendees who were newcomers to church life in the past five years.….. our goal is to raise this percentage of ‘newcomers’ to 12% over the coming years.”

The Archbishop turned his attention to the Georges River area, one of the five regions of the Sydney Diocese and one which has undergone transformation into one of Sydney's most multi-cultural areas. Due to the ongoing effects of the financial downturn, there had not been sufficient funds to appoint a new bishop since the retirement of Bishop Peter Tasker from full-time oversight in 2009.

“Owing to the generosity of some businessmen whom I specifically approached to fund this project and who have committed themselves to do so for the next three years” the Archbishop said “I am therefore delighted to announce that I have this day appointed the Reverend Peter Robert Lin as the Bishop of Georges River Region from 2015.”

Hundreds of synod members broke into applause as the announcement was made. 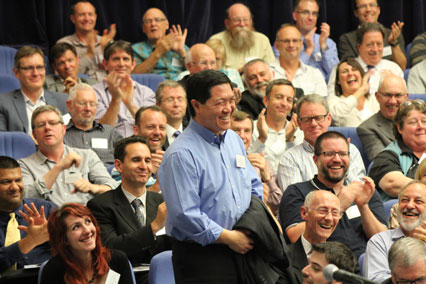 Mr Lin is rector of Fairfield with Bossley Park, where he has worked since 2001.

“He has overseen the growth of the congregations during that time and he knows the region well. He is a trusted servant of Christ, an able minister of the gospel, a respected elder among his peers, and one who has contributed to the strategic direction of the Diocese through his subcommittee work as a member of Standing Committee. I believe that Peter will make a significant contribution as a Regional Bishop as well as an Assistant Bishop in the Diocese as a whole.” Dr Davies said.

The Archbishop made another significant announcement appointing the Reverend Gary O’Brien as Director of Ministry Training & Development (MT&D).

“This is a very strategic position in the life of the Diocese as the Director oversees the development of all clergy and lay ministers from their departure from Moore College to their retirement. Currently MT&D is largely focused on the first three years after College, due to limited resources, a situation that the Synod will need to address if MT&D is to fulfil its mandate under its Ordinance.” the Archbishop said.

Mr O’Brien has been the rector of St Matthew’s West Pymble for 22 years.

“During that time he has exercised a fruitful ministry which has seen God’s blessing upon the growth of the congregation, an increase in ministry staff, a steady flow of members entering Moore College for full time ministry, and an ambitious building expansion on the property. Gary has a well deserved reputation for mentoring other ministers and these gifts will be invaluable in his new role.” Dr Davies said.

The Archbishop also paid tribute to Dean Phillip Jensen who was director of MT&D for 10 years and is stepping down as Dean at Christmas.

Iraq and the Middle East

A response to the ongoing violence and attacks by IS in Iraq is expected to be discussed later in the Synod.

"As we approach this first session of our Synod, we cannot be ignorant of the suffering of thousands of Christians in the Middle East as the militant forces of the so-called Islamic State attack any religious grouping that does not accord with their own distorted view of Islam, which impels them to slaughter Shi’ite Muslims, Christians and other religious adherents indiscriminately." the Archbishop said.

"The witness of such champions as Canon Andrew White in the city of Baghdad, itself under threat of invasion, should give us all cause to ponder how blessed we are in this country." he said.

"We are horrified at the barbaric behaviour and unadulterated evil of such militants and others like them in other countries, most notably, Boko Haram, who have kidnapped 200 schoolgirls and recently torched 185 churches in Nigeria." he said.

Dr Davies commended the appeal by the Archbishop of Sydney’s Anglican Aid which is raising money to assist the displaced Christians in Northern Iraq and 'Solidarity Sunday' on November the 2nd.

"I commend to your prayers all those who are suffering due to the brutality of these vicious attacks upon the weak and vulnerable, especially our fellow Christians. I am also grateful for the Federal Government’s decision to include displaced persons from Iraq in the intake of refugees, specifically including displaced Christians."

It was Dr Davies' second address as President of Synod, having been elected Archbishop in August last year.

The view from the top