In one of the most diverse groups in many years, candidates from IT specialists to a concert pianist, have been ordained for ministry in the Diocese of Sydney.

36 candidates were presented at St Andrew's Cathedral on Saturday, 4th February, to be ordained as deacons by the Archbishop of Sydney, Dr Peter Jensen. 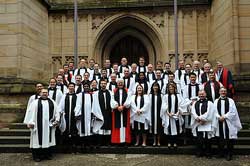 From a range of ethnic and employment backgrounds, the 32 men and 4 women will go to positions in parishes, church plants and school and hospital chaplaincies.

Among the ordinands was Sri Lankan born Rev Priya Atputharaj, who ministers in a University and in the congregation of St John's Cathedral, Parramatta, of which a significant number come from the subcontinent. "It's been a special occasion" she said "and it's great to have family and friends here but in some ways it's a continuation of what we have already begun". 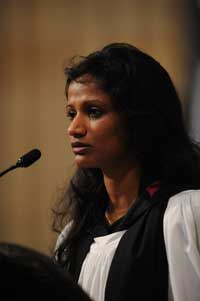 (Above: Rev Priya Atputharaj reads the Bible at the service)

Other ordinands included Rev Armen Nalbandian, who will minister at the Multicultural Bible Ministry at Rooty Hill,  Rev Thayyil John at Figtree and Rev Joshua Guo at Cabramatta.

Archbishop Jensen says he's pleased that the ordination groups are starting to reflect 'New Sydney'. Dr Jensen told the Sun Herald after the service "To be Australian, we must have people from all sorts of backgrounds and we're beginning to get them and I was delighted to see people from those different backgrounds here today."

The candidates also came from different work backgrounds, including one area not seen before. Rev Bruce Pass trained as a concert pianist.

After the Conservatorium in Sydney, Mr Pass studied in Weimar, Germany but it was there that he first considered swapping the keyboard for the lectern. "Certainly my experience in Germany was instrumental in my decision (to go into ministry full-time). We saw immense needs in that country, which was surprising because you don't usually think of European countries as needy for the gospel, yet we also saw many conversions."

Mr Pass is heading up a church plant at Warrawee, a joint initiative of St Phillip's and St James', Turramurra.

He believes all the ordinands have made a significant commitment. 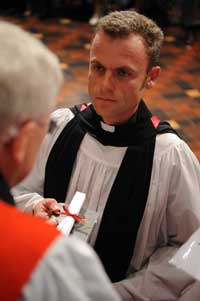 (Above: Rev Bruce Pass being ordained by Archbishop Jensen)

Ethiopian runners may be famous

Strengthening the ties that bind

John Howard calls for religious schools to have anti-discrimination exemption

Rector, Parish of the City of Devonport