Leaders have attended what the Prime Minister called a 'loving' commemoration service for victims of the Orlando massacre.

Malcolm Turnbull and his wife Lucy took time out from the election trail while Premier Baird, the NSW Governor David Hurley and the American Consul General, Hugo Llorens sat in the front row during the service led by the Dean of Sydney, Kanishka Raffel. Opposition leader Bill Shorten was represented by Senator Doug Cameron. 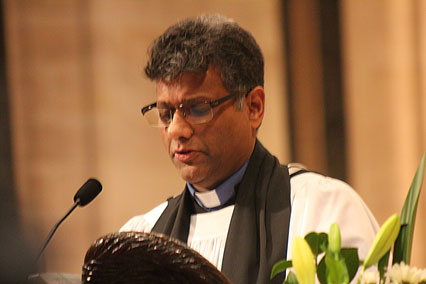 "We gather to mourn the dead, to offer comfort and sympathy, to renounce evil, hatred and violence, to pray for peace and freedom for all, to share the hope that is offered in the gospel of the Lord Jesus Christ." Dean Raffel said in opening the service. "We offer our sympathy and condolences to all LGBTI people knowing this crime targeted their community and we condemn all violence against people on the basis of their sexuality."

One minute's silence was observed in memory of those who died.

The US Consul General read from Revelation 21, while Governor Hurley read a passage from Isaiah 65 and Premier Baird read Psalm 46 - "God is our refuge and strength, an ever-present help in trouble." 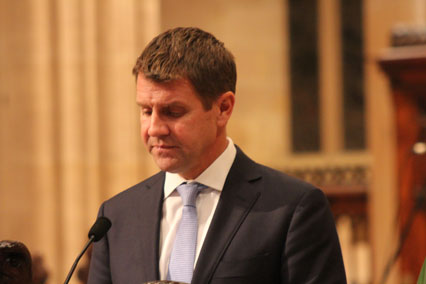 Reporters gathered at the side of the Cathedral and a live camera feed was given to all TV stations.

In his address, Archbishop Davies said there was deep grief at the 'crime of hate' which had turned the Orlando nightclub into a 'theatre of war'.

"It is only seven months ago that we gathered in this Cathedral to mourn with members of the French community following the attacks on Paris where 130 people were slain. Twelve months before that we mourned the deaths of those killed in the Martin Place siege.  ‘When will this end?’ we cry!"

Dr Davies went on to deplore violence, especially against the LGBTI community.

"As Australians, we abhor violence in all its forms—domestic violence, street violence, xenophobic violence, religiously motivated violence, and especially violence against members of the LGBTI community. As the leader of the Anglican Church in Sydney I want to affirm my stance against all such outbreaks of violence, and if any members of our churches have participated in such acts of violence against women, against young people, against ethnic minorities, against religious minorities or against those from the LGBTI community I offer my heartfelt apology." the Archbishop said.

"Yet we must all search own hearts, as evil resides in each one of us. We have all fallen short of the glory of God. None of us are without fault. Words of derision, mockery and exclusion so frequently fall from our lips when directed against persons who are different from us. This is especially the case for members of the LGBTI community, who have suffered the verbal abuse that so deeply cuts into a person’s soul. Where we have been guilty of such words, I also offer my apology on behalf of the Anglican Church in Sydney." 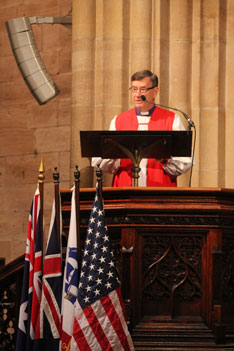 "God’s love knows no bounds. He extends his love to all without distinction and without prejudice. Therefore when one, let alone 49, bearers of the image of God are murdered, God grieves. When a further 53 are injured and hospitalised, God grieves. For our God is a God of compassion and grace, and in the depth of our sorrow and pain, he offers to carry us ‘through the valley of the shadow of death.’"

Outside the service, Prime Minister Turnbull described it as 'a loving ceremony'.

“It was responding to an act of unimaginable hate with solidarity and love,” The PM told reporters.

The Premier described the Archbishop's statements as “very powerful and entirely appropriate”.

“My hope is it’s received in the graciousness it was delivered. Certainly this was a clear example I think where the Archbishop has opened himself up to the entire community and asked everyone to join in standing together with those who were obviously impacted,” Mr Baird said.

Remembering weakness ahead of Fiji trip