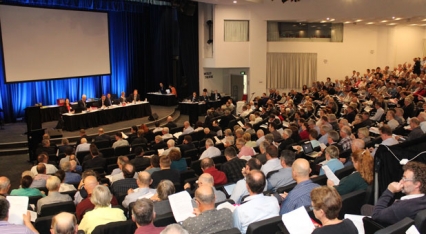 A special session of Synod has been called for late March to decide on the proposed merger of Anglicare and Anglican Retirement Villages.

The merger has been proposed as a way of boosting the reach and efficiency of both organisations at a time of considerable change in the aged care and community services environment.

In early 2014, a sub-committee was established to ‘examine the desirability of an amalgamation, consider possible alternatives, and report to a future meeting of Standing Committee’.

The issue was given fresh impetus when special meetings of the Anglicare and ARV boards in January this year voted to proceed with merger plans, to be implemented on July 1st, 2016.

At its February meeting, Standing Committee heard reports from the Chief Executives of ARV and Anglicare, Rob Freeman and Grant Millard.

Both CEOs told Standing Committee the merger would see “a solid foundation provided for the continuation and expansion of our ministries” and “removes duplication, reduces operating costs, and enables greater capability.”

Members asked a series of questions and then passed several recommendations from the merger sub-committee.

The subcommittee said “It would be legally possible for Standing Committee to take all the necessary steps to implement the proposed merger” but it “considers the significance of the matter is such that the Synod should be consulted before the necessary ordinances are passed.”

Synod is scheduled to meet in October, but an extra session will now be held on the evening of Thursday 31 March 2016, solely to consider the merger.

The sub-committee felt a special session was needed to speedily consider the matter, both to reduce uncertainty for staff and stakeholders and to ensure that any approved structural changes are in place before significant government policy changes come into effect in February next year.

It is understood that members of Synod will be given considerable details about the proposal, including draft ordinances and an invitation to attend a briefing before the March meeting. Synod members will also be given ample time during the session to ask questions, and then debate and vote on the proposal.

In seniors living and aged services, the merged organisation would operate 22 residential care homes serving 2100 people, 22 retirement villages serving 2600 people and would provide service to 1500 people in the Homecare program and 3000 people in HomeHelp. It would also have 21 day and respite centres.

Under the merger proposal, the organisation would provide services to around 50 thousand people every week.

Both organisations have distinguished histories, with Anglicare originating in the Church Society established by Bishop Barker in 1856 and the ARV growing out of Mowll Village at Castle Hill, started by Archbishop Howard Mowll and his wife Dorothy in 1959.