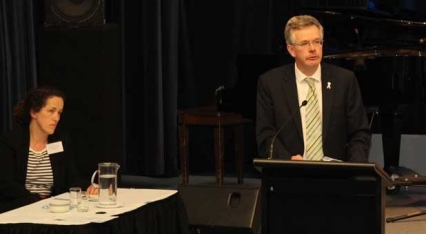 The 2013 Synod voted unanimously in support of a resolution calling for greater education among clergy with regard to domestic violence.

The motion, forwarded by Canon Sandy Grant from St Michael’s Cathedral in Wollongong, and seconded by Moore College lecturer and director of the Priscilla and Aquila Centre Ms Jane Tooher, requested that the college and Ministry Training and Development (MT&D) investigate the issue. If required, a new approach would be developed in order to better educate ministers about domestic violence and how to respond when they become pastorally involved in such a situation.

“The biblical concept of submission has been under threat, so we’ve defended it, vigorously and at cost, but we have not defended as well against its abuse,” Canon Grant said in moving the motion. “There is no excuse for domestic violence, never ever. We must work out how to say this loud and clear. We have the additional missional reason to pay attention: it is an area of suspicion in our society.”

Peter Hanson, a lay member from Christ Church St Laurence, moved that the second paragraph of the motion be deleted, part of which read: “consideration ought to be given to ensuring that upholding the Bible’s good teaching on submission – both in preaching and teaching, and in marriage education or counselling – is not easily twisted as cover for abuse”. Mr Hanson said his amendment was necessary because a failure by husbands to sacrificially love was the teaching most often disregarded and twisted, not submission.

A speech from another representative in support of the amendment drew attention to instances around the world where teaching on submission has allegedly been used to justify domestic violence.

The principal of Moore College, the Rev Dr Mark Thompson, spoke in defence of the unaltered motion and its second paragraph, saying the paragraph was the “beating heart” of the motion.

“It is precisely because those stories have been told that we need to keep paragraph two in,” Dr Thompson said. “It is precisely because the doctrine of headship, loving self-sacrificial headship, and voluntary submission has been twisted and distorted as a justification for that abhorrent behaviour, that we need to ensure that when we talk about domestic violence, we talk about this as well, and say that this biblical teaching must never be used… as an excuse for that sort of behaviour.”

Debate also included stories of abuse known to Synod representatives, as well as instances where churches have reacted heavy-handedly in response – with one person mentioning a  friend who had been told they would no longer be welcome in church after considering separation while in a domestic violence situation.

Mr Hanson’s amendment was eventually defeated but Synod did accept an amendment by the Dean of Sydney, the Very Rev Phillip Jensen, which added the words “and sacrificial love” after "submission", in order to address the concerns raised, particularly those from Dr Thompson and Mr Hanson.

"...It would seem to me that rather than seeing love as being left out therefore leave out the paragraph, let’s put love in,” he said.

After a sizeable majority moved to accept Dean Jensen's amendment over the other alternatives, the Synod then approved the motion unanimously.

After the motion passed Ms Tooher led the Synod in prayer for victims of domestic violence.