The second day of the General Synod of the Anglican Church of Australia has heard the results of the National Anglican Family Violence Project, which included prevalence studies and strategies for response and prevention.

In several resolutions, the Synod was reminded of research, released earlier, showing similar levels of family violence in Anglican churches when compared to the community nationally.

The Rev Tracy Lauersen from Melbourne, convener of the Family Violence working group, was joined by the Dean of Sydney, Sandy Grant, and Dr Karin Sowada from Sydney in presenting the resolutions.
(Photo: Dr Sowada above and Ms Lauersen below)

Ms Lauersen noted that the resolution and the first commitment “laments the violence which has been suffered by some of our members and repents of the part we have played in allowing an environment where violence went unaddressed”. 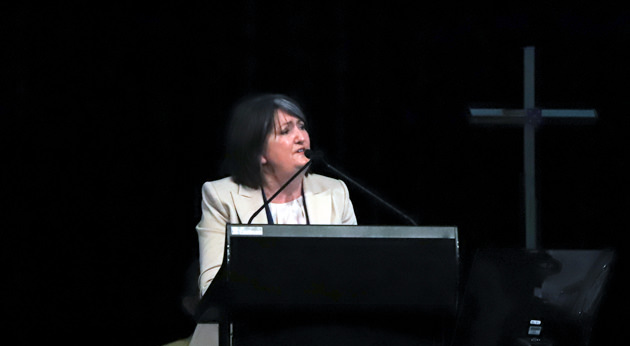 There were nine other commitments – including a pledge that the Church “supports cultural change in our communities by communicating effectively to our members” as well as training for “leaders, pastoral staff and parish councils to understand and be equipped to respond in ways that prevent and address domestic and family violence”.

"Domestic violence is wrong and the Bible should never be interpreted to justify or excuse any form of violence. We need to face that the Bible has been used to justify violence in the home,” Dr Sowada said. "The current national conversation on violence against women shows this is a problem that reaches deep right across society. It is a sad fact that the Anglican Church of Australia has decades of experience dealing with people who have been abused. We have not always done that well but the research demonstrates that there are positives in how we have handled family violence."

Dr Sowada said the Anglican Church has the opportunity to not simply continue as a part of the problem, but to help lead the way in changing church cultures broadly, and Australia’s culture in relation to this issue.

Synod then voted to ratify and resource a new Families and Culture Commission to continue examining the issue of family violence and to bring further recommendations.

“We need to take this process of change forward in the Anglican Church and this commission is how that might be done,” Dr Sowada said. "It has a big job to do and it is essential that this research and the work of the working group does not just end here."

1.
And so it begins
2.
New Mission initiative for the Global Anglican future
3.
Consultations begin on post-lockdown plans
4.
Southern Cross is back in print!