The need for Indigenous ministry

Why do we need Aboriginal ministry? I’ve been asked that so many times,” said the Rev Michael Duckett, pastor of Macarthur Indigenous Church and chairman of the Sydney Anglican Indigenous People’s Ministry Committee, who spoke to Synod about the report of a task force into Indigenous ministry in the Diocese.

A recent painting by Mr Duckett, which he asked Archbishop Raffel to hold up for Synod members to see, showed the geographical Diocese with just three circles to represent Aboriginal congregations: one at Tregear, another at Nowra – which covers the coast right down to Ulladulla – and Mr Duckett’s church.

He spoke briefly of broken families, communities and multigenerational trauma, and how entering a church can feel like going to court for some Indigenous people, adding: “When I preach sometimes [they] say, ‘Brother, the moment you start preaching you look like a white man’... they just go into this traumatised state of hearing a white man preach at them, and wanting to convert them and change them”.

To that end, a ministry established by the Sydney Anglican Indigenous People’s Ministry Committee in a bush setting at Wedderburn had created just such an environment.

“We’ve doubled in our number of church attenders even though we’re 12 [kilometres] out of town,” Mr Duckett said. “People have to go further to get to church. But they come... because they get to sit in God’s creation and hear the birds sing, and we light a fire up and they can relax.”

In an environment where his people can feel safe, he explained, they could then be touched by God’s love and begin to heal.

“I’ve seen men who hate white people – who’ve been traumatised and abused by them their whole lives – but when God comes into their lives, their hearts are changed. They know, ‘This is my brother now’, and they’ll sit with them. Only God can change the heart of a person... to love their neighbour as God has said.” 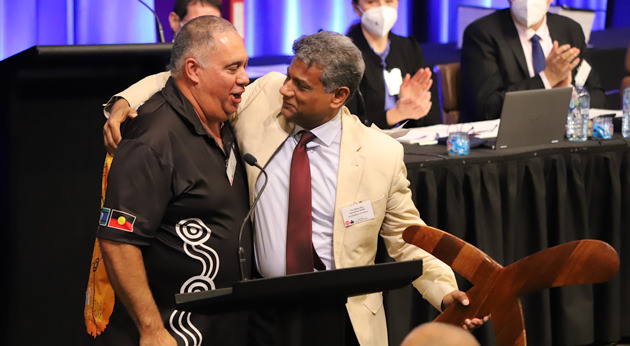 Above: The Rev Michael Duckett presents the Archbishop with a boomerang-shaped cross at the Synod

In seconding the motion, Tony Willis spoke of the report’s recommendations to seek further reconciliation with Indigenous peoples, encourage more partnerships between parishes and Indigenous ministries and develop an ongoing action plan to support and increase Indigenous ministry in the Diocese.

“Members of Synod... we have a biblical and moral responsibility to seek reconciliation and restoration with those whom we have dispossessed, either directly or indirectly, through the benefits that we have all gained,” Mr Willis said.

“To empower others, we must surrender the power that we hold over them, pointing only to the cross of Jesus – for that is the power of God, the wisdom of God.

“We will take the next step after tonight in determining what this looks like for us personally, and for our churches and organisations. Our Indigenous committee will work with the bishops, regions and parishes to develop gospel partnerships to encourage, support and resource ministry with our First Nation peoples into the future.”

Added Mr Duckett: “The key is just walking, talking, loving, respecting. It’s not rocket science, and I can assure you that when God puts a burden on your heart for Aboriginal people you will be challenged – you will be blessed.

The motion about the report’s recommendations was enthusiastically adopted by the Synod.

Larissa Minniecon (above), a lay member from Scarred Tree Indigenous Ministries at St John’s, Glebe, moved a motion that committed Synod members to learning more – and educating other Anglicans – about the Uluru Statement of the Heart. The motion also welcomed the conversation about establishing a First Nations voice in the Australian Constitution and encouraged church members to give “generous consideration to the case to vote ‘Yes’” to the upcoming referendum question on the issue.

Synod, I ask this question: will you have this courageous conversation with us

“Fifty-five years ago, I would not be allowed to stand here before you... I was not considered a part of the population of Australia,” Ms Minniecon said. “That is the power of the 1967 Referendum... that I am a citizen.

“Today, I stand before you as an Australian citizen – it says it on my passport and birth certificate, but I am also a proud Kabi Kabi, Gureng Gureng, Australian South Sea Islander and Torres Strait Islander woman.”

She reminded members that Australia was “the only Commonwealth country to not have a treaty with its Indigenous peoples – not to have an Indigenous voice enshrined in the Constitution.

“Synod, I ask this question: will you have this courageous conversation with us?”

The motion passed to further applause.

Meantime, Scarred Tree Indigenous Ministries is hosting a conference in October that will seek to provide church leaders with a more comprehensive understanding of the dialogue around the Voice to Parliament.

“The value of the conference is that it will provide theological perspectives on the Voice and an understanding of how churches can follow, or come alongside, their Indigenous brothers and sisters,” Ms Minniecon says. “It will position churches for better, more ethical conversations and help them engage with Aboriginal and Torres Strait Islander peoples more effectively.”

1.
Creative ways to care for people you have never met
2.
Appalling famine in Madagascar set to worsen
3.
How youth ministry has changed, yet stayed the same, in 30 years
4.
Adultery of the heart

Food and fellowship on the northern beaches