Bishop John Reid, a distinguished church leader and a former Bishop of South Sydney, has died just weeks after his final public appearance at the consecration of new bishop, Dr Michael Stead. 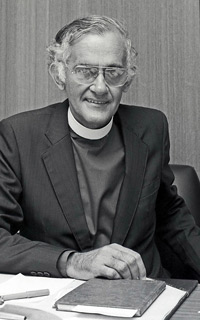 Archbishop Glenn Davies has paid tribute to Bishop Reid, calling him "a faithful servant  of Christ and man of extraordinary ability".

"John Reid served the diocese of Sydney as rector of Christ Church Gladesville and later as an Assistant Bishop for more than 20 years." Dr Davies said.

"He will be remembered for being an accomplished Bible teacher, an able administrator and a passionate evangelist. His abilities were internationally recognised through his involvement with the Lausanne Movement as chairman, as well as the missionary organisation Interserve."

Bishop Reid was in failing health and some respiratory distress as he attended the consecration on December the 5th, of Dr Michael Stead as the new Bishop of South Sydney.

He was assisted by other bishops as he made his way in the long procession of clergy in St Andrew's Cathedral.

The photo above was the final official picture of Bishop Reid (at right) as he joined the former Bishops of South Sydney, Robert Forsyth and Peter Watson (centre), congratulating Dr Stead.

There will be a funeral service for Bishop Reid at St Andrew's Cathedral on Thursday, 14th January 2016 at 10am.

The Perils of Perception