His Christian faith and a family experience of dementia first drew Dr Stephen Judd to the field of dementia care. He has now been made a Member in the General Division of the Order Of Australia (AM) in recognition of his work.

Dr Judd stepped down last August as the chief executive officer of the independent Christian charity, HammondCare, which he had led since 1995. He has been succeeded by former NSW Premier Mike Baird.

In the Australia Day Honours, announced by Governor-General David Hurley, Dr Judd was given the AM for significant service to older persons living with dementia.

“I was chief executive of HammondCare for 25 years and our focus was on dementia and palliative care,” Dr Judd told the Diocesan news magazine, Southern Cross. “[The important thing is] the work continues. At the end of the day, it's the people on the ground who are making a difference in peoples’ lives each and every day.” 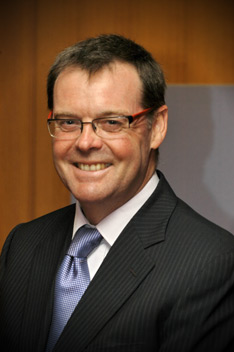 Dr Judd sees the award as an opportunity to raise awareness. “One of the reasons why I am happy to accept this is to keep dementia on the agenda. At the moment we know exactly how many people each and every year get prostate cancer and get breast cancer – 19,000 and 17,000 respectively – but we have no idea how many people get dementia each year, so I'm hoping that in the future we continue to measure that number so we actually know how many people have dementia.”

Behind the years of passionate contribution are the reasons Dr Judd originally swapped a career in information technology for dementia care: “because my mother had dementia and she lived with us for the last decade of her life, and I wondered whether or not we could do a better job in that space”.

Dr Judd, who is a member of St Andrew’s Roseville, has also made a distinctly Christian contribution. “It does mean that you get a rare opportunity to show God's love to his creation in very special and practical ways and continue to share with him in building his kingdom.”

Other Anglicans on the honours list include Wendy Carver, the CEO of Lifeline (Harbour to Hawkesbury), honoured with an Order of Australia Medal for her service to community mental health. Also on the OAM list, the late Mrs Denise Bannon, a former warden of St Mark’s, Revesby, for service to the community, particularly youth and Indigenous people. Janet Kneeshaw of Pymble, a volunteer organiser and chorister at St John’s, Gordon was awarded an OAM for service to the performing arts, and to the community.

In another major award announced on Australia Day, chaplain John Kewa was named Wollongong’s Citizen of the Year. Mr Kewa is the manager and chaplain of the Mission to Seafarers at Port Kembla, and rallied the Illawarra community to help the stranded crew of the Ruby Princess, docked at Port Kembla during the COVID-19 outbreak.

Hundreds of care packages and letters of support from local school children were delivered to the ship. The crew unfurled a large banner saying “Thank You Illawarra” when the Ruby Princess finally sailed out of Port Kembla. Bishop Peter Hayward is president of the Port Kembla Mission to Seafarers and Mr Kewa attends Dapto Anglican Church.

...if we were going to do anything to live up to our mission and our ministry that was the moment. 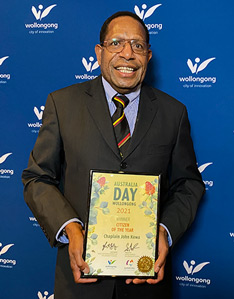 Said Mr Kewa: “The Ruby Princess became the main source of COVID-19 outbreak and they were looking at who was going to be responsible but there was one thing that was missing. No-one ever mentioned the 1200 staff and crew. But [they are] human beings and, for us, if we were going to do anything to live up to our mission and our ministry that was the moment.”

Mr Kewa says he posted a message on Facebook directly to the crew of the Ruby Princess. “The simple message was:  It's not your fault, we are thinking of you and we will do our best to reach out to you. That message reached about 80,000 people in just 24 hours.”

It was difficult to get assistance through, but his persistence paid off. “Their mental health situation was one of my main concerns and I'm really thrilled with the community response,” Mr Kewa said.

“Our ministry is not the standard kind of parish church.  It’s a special ministry where we remain almost invisible in reaching out to almost invisible people. That's what makes us really proud as a Christian organisation in the Illawarra, that it was such a strong witness living out the gospel in action on a day when we were needed.”

1.
I am grateful for COVID-19 and I am grateful that my husband of 36 years has Alzheimer’s.
2.
A guaranteed way to deepen your faith
3.
How the science of habits can build your faith
4.
How you can help school leavers stick with Jesus

Restrictions easing for churches, with promise of more