No higher title than ‘child of God’

There was a knock at the cathedral door just moments after the afternoon rehearsal for the consecration and inauguration of Kanishka Raffel. The door was opened by the Archbishop-elect himself. "Would you like a cup of coffee?" he said to person at the door, one of the many people in difficulties who take shelter around the Cathedral.

"Do you take sugar?" the about-to-be Archbishop said as he went off to make the coffee himself.

It seemed fitting that only four hours later, before the Governor-General, politicians and leaders of other religious denominations, he was giving a sermon urging humility before the cross of Jesus. 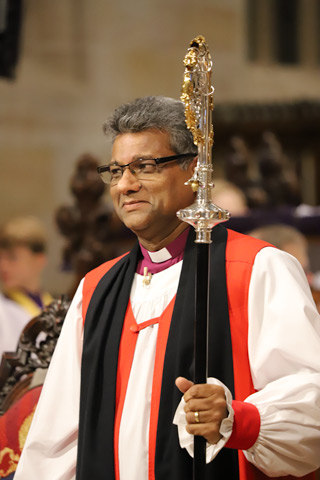 Archbishop Raffel made history as he was consecrated and inaugurated at St Andrew's Cathedral as the first non-European Archbishop of Sydney.

St Andrew’s Cathedral was as packed as COVID would allow, cutting short the plans of Victorian guests but plenty of visitors from the Archbishop’s old church in Perth were able to attend, as was the consecrating bishop, the Primate and Archbishop of Adelaide, Geoff Smith. (watch the full video here)

Bishops from all over Australia took part in the traditional laying on of hands to consecrate the new Archbishop. He was then given the pastoral staff of the Diocese of Sydney.

In his first sermon, he made it clear he wants to mobilise the 275 parishes and 450 congregations in Sydney and the Illawarra and stressed the central message is God's salvation plan through the crucifixion and resurrection of Jesus.

"The message of the cross is indispensable for Archbishops, for the Church’s mission and for Christians in daily life and witness," the Archbishop said.

"Our culture is suspicious of revelation, we’re sceptical about truth, we only trust what we experience, if people are interested in the spirit, it is private, not something I do in community…..We must engage with all of that, we must be creative, courageous, contemporary, willing to fail. We must find a way of speaking that connects with our culture but we will not make disciples without the message of the Cross."

"To the most empowered but anxious generation we have ever known, the Cross says you are loved, you are not alone, you may cast all your anxiety on God knowing that he cares for you.  How can we know he cares? Because of the Cross. The Apostle John says - This is how we know what love is, Jesus Christ laid down his life for us, and we ought to lay down our lives for our brothers and sisters."

Archbishop Raffel spent the final moments of his sermon, addressing his personal reaction to his election just three weeks ago by the Diocesan Synod. 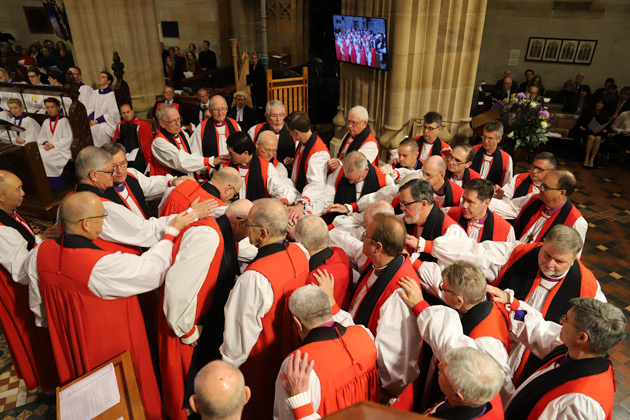 "I am cognisant of the weighty responsibilities committed to me. I have made solemn promises and I have asked for your prayers and God’s help. There is an element of tradition and history. But do not let the paraphernalia obscure the message.  Do not be deceived. At the foot of the Cross, which is all the world to me, I am nothing more and nothing less than a grateful and forgiven sinner.  Though I have been given particular responsibilities, I have no higher dignity or title than 'child of God'.

Whatever happened to planking?

Consider being a builder not an inheritor