"Give us the courage to accept the realities of our history so that we may build a better future for our nation" the congregation prayed as the service began at St Andrew's Cathedral, Sydney on National Sorry Day.

Twenty two years earlier on 26 May 1997, the Bringing them Home report of The National Inquiry into the Separation of Aboriginal and Torres Strait Islander Children from their Families (the 'Stolen Generations') was tabled in Federal Parliament. It told the traumatic story of violence and injustice experienced by hundreds of Indigenous families from whom children were forcibly removed. Recommended in the Bringing them Home report, National Sorry Day is a time to acknowledge the devastation caused to families, communities and clans; to remember the Stolen Generations and to pay tribute to all the Stolen Generations across the nation who still survive today. 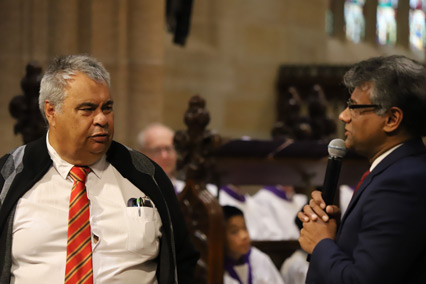 The Dean of Sydney, Kanishka Raffel, invited the Reverend Neville Naden, Indigenous Ministry Officer for BCA, as preacher for the Sorry Day service.

"That an Indigenous Christian leader will bring God's Word to his people on this day speaks of the grace and power of the gospel of Christ crucified by which God has reconciled all things to himself, and his people to one another," Dean Raffel said. "To those who have suffered injustice and oppression; to those grieved by our own sin, and the sins of our history, the gospel of Jesus speaks dignity, love and hope and allows us to find forgiveness, healing and reconciliation."

As Mr Naden began his address, he detailed some sobering statistics. "In New South Wales alone, it is suggested that some six and a half thousand children were put into care with the hope of breeding out the race" Mr Naden said. "This government policy totally devastated both families and aboriginal communities. So, Sorry Day is important as most aboriginal families were touched in some way by some of these policies."

Respected Aboriginal leader Aunty Jean Phillips prayed the Prayer for Reconciliation written by Australia's first indigenous bishop, Arthur Malcolm and his wife Colleen. "Lord God, bring us together as one" the prayer reads "Different cultures, but given new life in Jesus Christ." 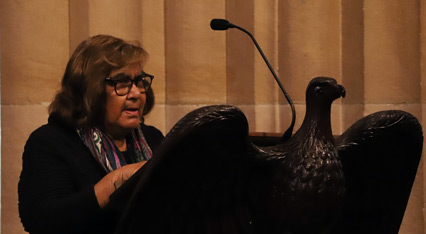 Mr Naden took up this theme in his sermon. "There have been a lot of things that have been done in the name of the church that have been ungodly. This goes without saying but we need to take it on and learn to deal with such things.. But the wonderful thing that the church has done is to bring the gospel to these lands. This gospel brings life where there is no life. Those on the fringes of society are brought into the inner circle of God's family." 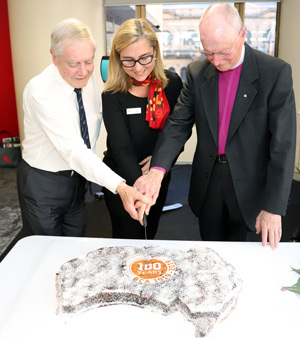 "There were two significant events in Australian history on this date." Mr Naden said. One hundred years ago today, next door in Chapter House, a group of Christians gathered to establish the Bush Church Aid society, to proclaim the Gospel in rural and remote Australia. I don't think those who gathered in this very precinct could ever imagine the impact of their work - that it would succeed and bear the fruit that it has over the years. Today, we give thanks to God for this work."

The event was being celebrated by churches all over Australia, as BCA has a ministry presence in every state and territory of Australia. 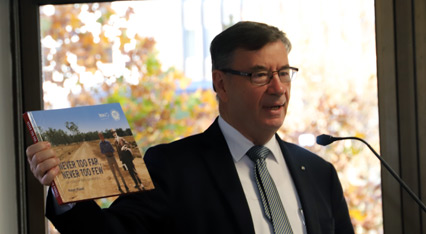 After the service, the Archbishop of Sydney, Glenn Davies and the former National Secretary of BCA, now the Bishop of Canberra, Mark Short, helped launch the Centenary Book 'Never too far, Never too few'.

Before former staff, guests from around Australia including the Bishop of the Northwest Gary Nelson and former Archbishop of Sydney, Harry Goodhew, Archbishop Davies gave thanks to God for the rich history of BCA. 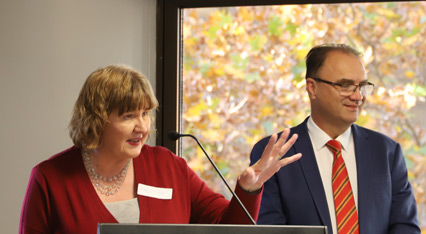 Bishop Short interviewed author Robyn Powell, saying the brief for the book had been inspiration, not just information. Mrs Powell said she hoped the stories in the book would introduce a new generation to the work of BCA and just what God had done through 100 years of faithful ministry in small towns, outback areas and bush settlements.

[Testimony] “Cancer is a personal test of faith”