The bell tower at St Matthew’s Windsor on Sydney’s outskirts has seen many sights since the 1820’s, but the scene now is one of water, water everywhere.

Days of relentless rain has led to flooding across Eastern New South Wales and Southeastern Queensland and the rain is not stopping.

The SES moved into the parish centre at St Matthew’s on Monday, using it as a base of operations for assistance to the town. The photo above was taken from the historic bell tower, showing the extent of the catastrophe. The church is on high ground, so is not in danger of flooding. 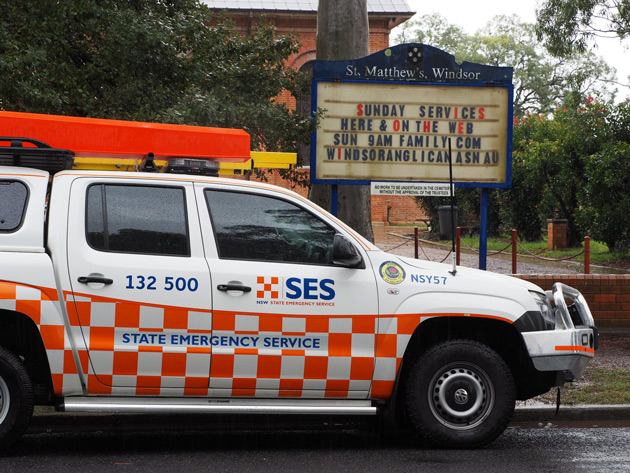 Other parts of the area don’t have such protection.

At the weekend, a mini-tornado hit Chester Hill, but the church was not damaged. Not so for many of the residents.

Another concern is the Pitt Town area, already faced with rising water.

Picton, which flooded through the CBD five years ago, is safe at the moment. 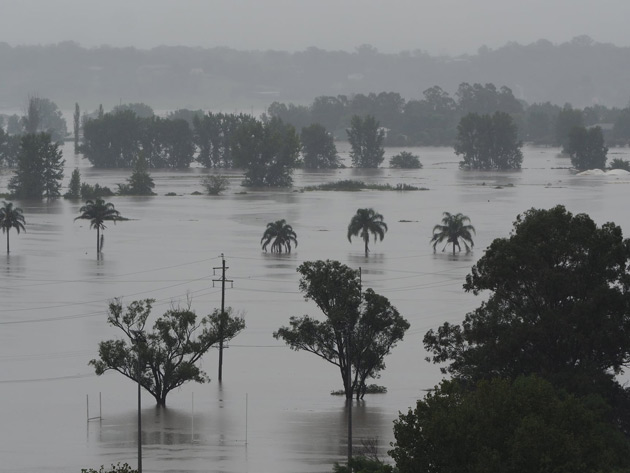 The congregation at Emu Plains is also on high alert, with several roads under water and residents waiting to hear further instructions.

“SES messages have been sent out to the community for evacuation in certain areas with members of the church feeling the worry of the rising waters,” reports the Moore Mission team on its blog.

“As our team spends time here in Emu Plains, we see the need for the community to hear of the hope that Jesus brings particularly in a time of emergency like this. Our team will (hopefully) be continuing with our plans for doorknocking each day with umbrellas and rain jackets in hand. Please be praying for the people we will be meeting, for the questions they may have as they sit in fear of these floods and hear of this hope of a new creation.”

The parish at Kurrajong and their local community have been cut off completely from surrounding towns, with the Hawkesbury river flooding and landslide blocking Bells Line of Road at Mt Tomah. The local bakery has run out of flour and the Wood family purchased the last bag of 5kg rice from Coles. Thankfully most houses have weathered the storm so far. “People are stressed and worried about the future,” says the Rev Peter Wood, senior minister of Kurrajong and North Richmond parish.

We’ll be updating this story as more details come in.

Te Rev Mark Charleston has written a prayer for those affected by flooding. Download PDF here.

1.
The emergency you haven’t heard about
2.
Anglicare braces itself for reductions to JobSeeker
3.
Toys ’n’ tucker ’n’ COVID

Goodhew, godliness and the Gong