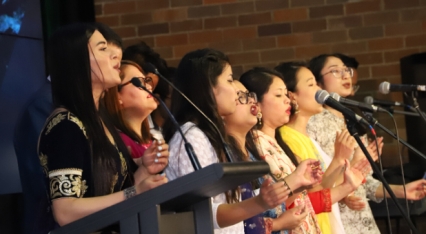 There was a colourful lineup beside St Luke's, Liverpool on October 20, but the people were not lined up to get into the packed bicentenary celebration – rather they were preparing to read the Bible in the more than 20 languages of people in the parish.

The different tongues ringing out from the congregation was in sharp contrast to the first meetings in the colonial outpost in 1819, when the countryside of Liverpool welcomed the new Georgian-style building.

"We are not celebrating the building," said the rector of Liverpool, the Rev Stuart Pearson – "we are celebrating 200 years of Christian mission in this place."

"We are celebrating 200 years of Christian mission"

The celebration required a massive logistical operation, which was carried off with precision as the church welcomed civic visitors such as Governor Margaret Beazley, the Mayor of Liverpool, Wendy Waller, and local MPs, as well as Archbishop Glenn Davies, the Bishop of Georges River, Peter Lin, and past and present parishioners.

Not only have languages changed at St Luke’s, but so have the buildings. For the bicentenary, the original church held the overflow of the congregation and the main event was in the larger church Ministry Centre, built in 1981.

Native speakers had a lot to say

The topic verse for the morning, John 3:16, was read by native speakers from countries such as Mauritius, Egypt, Samoa, Malaysia, Italy, Hungary, India, Sri Lanka and Afghanistan.

A Nepali choir brought people to their feet singing “Days of Elijah”, a popular song among Nepali Christians. The Nepali group, which began only eight years ago, is now one of the largest in the church.

"The multicultural nature of that welcome was appropriate," Archbishop Davies told the congregation, "because we welcome all people and want everyone to hear the good news of John 3:16.

"When Governor Phillip was given his instructions from England, he was to enforce religious observance and good order in the new colony. But there was a chaplain on the First Fleet, Richard Johnson, who saw that it wasn't the moral instruction but the gospel which changed people."

The gospel has changed lives

Later, Governor Lachlan Macquarie commissioned St Luke's church as part of the fledgling settlement at Liverpool and it was designed by convict architect Francis Greenway. Only two rectors of St Luke's are still living: the incumbent, Stuart Pearson, and the previous rector, the Rev Jim Ramsay.

Descendants of former rectors were present, including relatives of the first minister, the Rev Robert Cartwright, who conducted the first service on St Luke's Day, October 18, 1819. A history of the church, written by congregation member Dr Bryan Cowling, will be published next year.

"It was the gospel which changed people"

"Governor  Macquarie wanted a church in the centre of Liverpool because he wanted people to know about Jesus," Dr Davies said, pointing out that in the same year the governor also laid the foundation stone for St Andrew's Cathedral.

The church precinct still sits prominently in the centre of Liverpool, running services, Sunday school, playgroups and hosting community events through Anglicare and its own community chaplaincy.

"We serve the people of our community and hold out the message of Jesus,” the Archbishop said. “Some people are not there yet – they are still stumbling over that message. But we continue to reach out to them as we have done in this place for 200 years."