Sydney’s leading evangelist for more than 50 years, John Chapman, has passed away in hospital at the age of 82.

‘Chappo’, as he was affectionately known, was converted in his teens and was active in youth ministry. Following a stint as a manual arts teacher, he spent a year in Moore College and was ordained in the Diocese of Armidale in 1957. After a challenging curacy in Moree he was appointed Youth Director for the Diocese in 1960. Chappo travelled widely around the parishes, teaching, evangelising and training future leaders. With his experience and gifts it was natural for him to take up the role of Director of Christian Education (1966-68).  He also played a significant role in the election of Bishop Clive Kerle to Armidale.

He moved to Sydney and joined the Department of Evangelism, where he was director for more than 25 years. Among his assistants was a young Phillip Jensen, with whom he would later conduct university missions, particularly during the 1970’s and 80’s.

His wide preaching, teaching and writing ministry saw him speaking to groups throughout the Sydney diocese, in Australia and overseas, particularly in England where he was a regular visitor.

The Rev Dick Lucas, retired rector of St Helen’s Bishopsgate, called him “a dear friend, a marvellously stimulating brother in Christ, a shrewd fellow worker and, of course, a superbly gifted evangelist and teacher.  John knew his special calling, and, to his final days, was energetically gospelling and offering to all the possibility of a Fresh Start.”

“When it was reported that Chapman was on the horizon, morale soared, and requests for his services poured in – this man was a tonic to have around” Mr Lucas said.

His books, including "A Fresh Start", "Know and Tell the Gospel", sold in the tens of thousands and helped many Sydney Anglicans with personal evangelism and sharing the gospel. 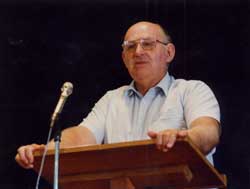 Photo: Chappo as many remember him, preaching at Katoomba Convention

Mr Chapman never married but was at home in many churches across the diocese.  The single quarters at Moore Theological College  was named "John Chapman House" in his honour.

Although he had been ill for some time, Chappo received a stream of visitors from around the world during his retirement in Sydney’s south.

In recent weeks, one of his last duties was a project close to his heart, the newly created John Chapman Foundation, established in October to raise money to recruit and train evangelists.

He was admitted to St George Hospital in late October and had been on the critical list for a week.

On Friday 16th November, several close friends visited to read the bible, pray and say their last farewells to a man who was one of the most loved preachers in the Sydney Diocese in second half of the 20th century.

He finally succumbed to multiple organ failure on Friday night.

"Chappo represented the very essence of what our diocese has always stood for and continues to stand for. A strong affirmation of the authority of the bible, the importance of preaching and an approach to evangelism which made it central while at the same time respecting the intelligence and integrity of the listeners. He was a man of faith like Joshua of old, and he lived out his faith with clear godliness of life"  Dr Jensen said.

"Like many others, Christine and I feel the loss acutely. When i visited him on his last day, he reminded me once more that he prayed for us daily. His support for me personally for over 40 years has been an incalculable blessing." he said.

There will be a public thanksgiving service, led by the Archbishop, at St Andrew's Cathedral on Saturday 24th November at 2.30 pm. Dean Phillip Jensen will preach.

The collection will go to the John Chapman Foundation. Donation details are on the website.

The funeral will be live streamed on the Internet and available for viewing later. Watch sydneyanglicans.net for details

There’s no role for green politics in Christian baptism