Training, fellowship and strengthened ministries – what happens when churches work together

Six inner west churches have come together to train children’s and youth leaders at the first Cultivate Conference this week.

The format of Cultivate is not revolutionary, with Bible talks, ministry workshops and strands exploring Old Testament, New Testament and doctrine. What makes the conference special is that this is the first time the churches of the Inner West Mission Area have collaborated and tailored a training conference to their context.

“We saw it as a great opportunity not just to train our people, but to support youth and children’s ministry in the inner west and remind people that what we are doing is part of a bigger mission,” says the Rev Ben Gray, senior minister of All Saints’, Petersham, who brought six members from his church and taught a Bible teaching strand group.

Sharing ministry challenges and experiences has helped his church to see it is not alone in its task to preach the gospel.

“There are commonalities in that we all know the area, the youth and children [we are leading] are breathing the air of a similar culture,” he says. “The feeling of Christians being isolated in the inner west – kids in schools might not have other Christians in their classes – there is a very strong secular and even anti-Christian vibe sometimes.

“Seeing leaders from different churches praying for each other and their ministries, especially when some of them are the only leader from their church or their youth group is only one or two kids, [that] has been a real encouragement.”

We are part of a bigger mission

Courtney Mattick, who leads kids’ and youth ministry at All Souls’, Leichhardt, found hearing the ministry experiences of others heartening. Coming from a new youth group of five, it has been refreshing to meet other leaders in a similar situation.

“When there were five people, we thought, ‘This is good but it would be nice to have more’... It’s nice to hear we’re not the only ones [with small numbers], and good to brainstorm ideas to get more youth into our youth groups and churches.” 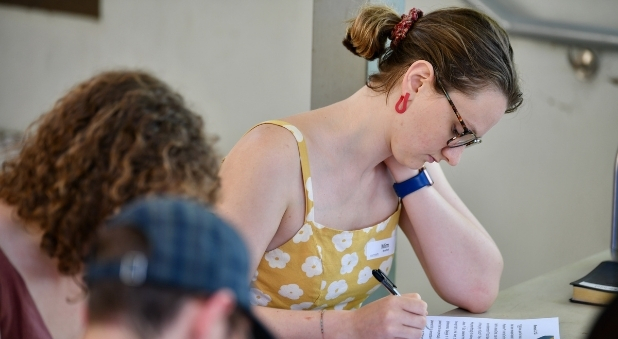 Invited by the youth minister at St Andrew’s Cathedral, Stephanie Adams wasn’t sure what to expect from Cultivate. “I’m a student minister but haven’t been involved with children’s or youth stuff so far, but I’m keen to be involved,” she says. “It’s really refreshing and encouraging to think about [kids’ and youth ministry] in a group of people who are eager to do that.”

We can achieve more for the kingdom together

The Rev Dominic Steele, rector of Village Church in Annandale, was inspired to start the Cultivate Conference after preaching at a similar-style event in Sydney’s southwest, Sweatcon.

“I don’t think we’ve done anything radical, we’ve just pinched the stuff from Sweatcon!” he says. “I am impressed with the model of Sweatcon in southwest Sydney. They have churches working together in a way that I have never seen before. I saw 200 or more adults be trained in ministry in the southwest… I wondered if the churches of the inner west could work together in the same way.”

"Sweatcon has churches working together in a way that I have never seen before."

Sweatcon, which stands for South West Evangelism and Training Conference, has seen local churches collaborate for over a decade and it has trained people of all ages. It started in order to bring the churches together and train those who weren’t able to attend the traditional Bible training conferences on offer.

The senior minister at Guildford, the Rev Tim Booker, has been involved with Sweatcon from the start. “I think the brilliance of it is that it reminds you that you are a part of the body of Christ, and the body of Christ is big and growing everywhere, even in the tough areas,” he says.

“God is raising up and equipping and gifting all sorts of people from every nation, in every area. You can lose sight of that if you have your head down in your own little area. Sweatcon raises your head up above the gun’s turret.”

1.
What our past teaches us about youth ministry now
2.
And so it begins
3.
Advancing the ministries of women
4.
Three ways to keep recruiting for ministry

Open Doors reports global persecution has increased during the pandemic