Ministry to the heart of Bankstown

The partnership grew out of the churches’ passion for reaching the people of Bankstown with the gospel, recognising each had different strengths and challenges.

While St Paul’s was struggling with reaching a critical mass, its congregation depleted after two years of lockdowns, SWEC was in desperate need for a space to meet – particularly to support its young families. The resulting partnership means both churches have begun to thrive.

“We’re driving a stake for the gospel in a key suburb, in the middle of southwest Sydney,” says the Rev John Bartik, the rector of Bankstown. Senior pastor of SWEC, the Rev Peter Ko, agrees, saying: “We’ve been given a fresh sense of church, especially post-COVID”.

“We’re driving a stake for the gospel in a key suburb, in the middle of southwest Sydney"

The idea of partnering on a Sunday came about after a local youth ministry began to meet in the St Paul’s hall. This ministry, which combines two Anglican churches, two Vietnamese Churches and SWEC, blossomed in its new location, consolidating the idea that collaboration could work.

The subsequent need for SWEC to launch a morning congregation brought it and Bankstown to consider a combined service.

Both pastors are clear that the partnership works because of their unified faith and desire to reach Bankstown.

“SWEC had a really strong gospel attitude – their priority the whole time was to see the gospel go out to the suburb,” says Mr Bartik, emphasising that neither side was focused on concern for its own “brand”.

He adds: “The shared theological heritage from Moore College and SMBC has meant that there haven’t been any differences of theological alignment or concepts of mission. SWEC is well aware of the Sydney Anglican Diocese, its history and manner of administration, and is happy to accommodate us.”

Despite the unity in faith and gospel attitude, there were lots of elements for the different services to work through – from welcoming, follow-up and finances to how the service would run. 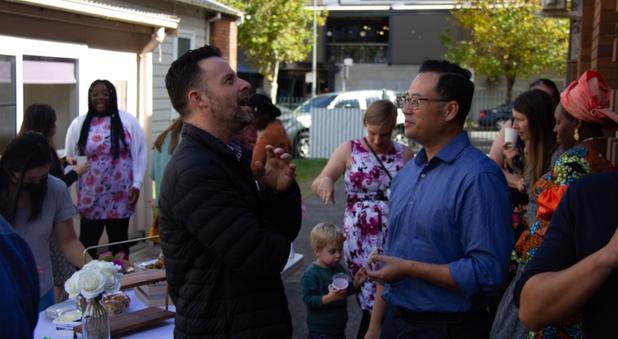 Eventually, the churches decided on a six-month trial period, which began on Easter Sunday.

In the months leading up to the launch, the congregations were given the opportunity to communicate, ask questions and vote about whether they wanted to go ahead with the partnership.

“There was a nervousness because of the unknowns around merging, but not quite merging,” says Lisa Truong, a SWEC member who attends the new combined combination. “It felt unique in that we’re not one church, we’re sharing a service together.

“There’s been no room for pride – neither church has held tightly to the way we’ve always done things.”

One of the key things both congregations had to work out is what it means to be a member of the various churches.

Says Mr Ko: “We’re not protective of our people, but we are making sure they don’t fall through the cracks”.

A few months into the trial period it has almost unanimous support, with each group benefiting from the other.

“It has been fantastic – getting to know St Paul’s, serving them and being served by them,” Mr Ko says.

While there are still differences and areas each church has had to compromise on, they believe the benefits far outweigh the cost.

Lisa Truong says that, from a mission perspective, the combined service is exciting: “We’ve got a much better vision of what it looks like to have a church that is multiethnic and multigenerational. Someone from the local community could walk in and see someone that looks like them.”

1.
Andrew and Andrew at St Andrew’s
2.
How do we fit into God’s plan for the nations?
3.
Instagram account helps parents to raise disciples
4.
Local love for COVID-ravaged Oakhurst congregation