The Synod of the Diocese of Sydney has voted in favour of a six-year plan to help fund the infrastructure of the Diocese of Bathurst, to ensure the continuation of Christian witness in Central Western New South Wales.

The Diocese has been beset with financial problems for the past decade and with shrinking congregations, is approaching the point where it cannot support the office of the Bishop and the Registry, vital to the oversight of ministry in the region.

The Synod was asked to provide $250,000 a year to run the essential functions and the Metropolitan of New South Wales, the Archbishop of Sydney, would approve candidates to be considered by Bathurst's Nomination Board next year, when the current bishop, Ian Palmer, retires.

The Board would have the choice of at least two candidates selected by them and approved by the Metropolitan.

Dr Karin Sowada - who moved the motion with the Bishop of South Sydney, Michael Stead - said she was convinced help for a sister diocese was in the spirit of early church ministry.

"Bathurst has had to work through a great deal, not the least being the discharge of their debt. That has now happened. The Bathurst Diocese knows things need to change just to survive declining church attendances, the crises in rural communities, and encroaching secularism. Many rural dioceses around Australia are facing this challenge. The proposed arrangement will facilitate the development of stronger links between Sydney and the West to support hard‐pressed rural churches and the many Aboriginal communities, from Bathurst to Bourke." Dr Sowada said. 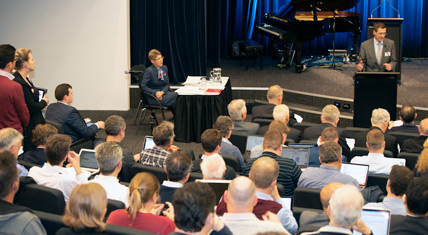 "But there are other reasons to support this." she continued. "If we don’t do this now, matters will decline in Bathurst and we may be faced with a more serious situation. The collapse of the Bathurst diocese would be a disaster, not the least for the faithful brothers and sisters living there. But in my mind, there is a further reason which is the most compelling of all. It's just the right
thing to do. I am convicted this proposal speaks into the history of the early church - the things read about in Paul’s letters."

Dr Sowada spoke of Paul's advice to the Galatians. "He calls on the believers in Galatia to help carry one another’s burdens. We are now called to do the same for a Diocese right on our doorstep that was ’birthed’ from our own in 1870."

As seconder, Dr Stead said "If we sit on our hands, it is lose-lose. If we act now and support Bathurst, it is win-win."

Dr Stead - who was one of the negotiators of the plan - said "It is a win for the spread of the gospel in central and western NSW, because if we don’t help out, gospel ministry will slowly wither and die there. In many towns, the other denominations have already pulled up stumps. If the Anglican church pulls out, there is no gospel witness left."

Meet the third Indigenous student ever to attend Moore College