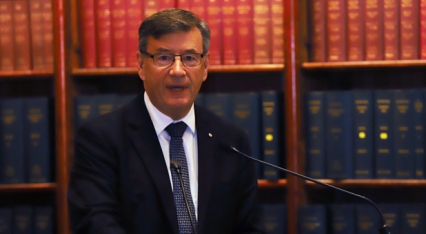 Archbishop Glenn Davies says he accepts the outcome of the postal plebiscite delivered this morning but warns there must be freedom of speech, conscience and belief for Christians and others who disagree.

"Now that the outcome is that the yes vote is the majority vote on behalf of the Australian people - as I said to the Prime Minister 18 months ago on behalf of other religious leaders that if that's what the Australian people want then we live in a democracy and I recognise and acknowledge that outcome. Therefore it is quite proper for the parliament to legislate for same-sex marriage in accordance with the will of the people - notwithstanding that it wasn't a referendum which was compulsory voting, but almost 80 percent of people voting is a very high threshold and I accept that. That doesn't mean I will change my views. I will still continue to teach that marriage is, in God's plan, between a man and a woman. But I acknowledge that once the parliament passes those laws, that will no longer be the law of the land." Dr Davies said.

"The consequences then are - what happens to people who want to hold to that truth. It is one thing to say, for example, we don't have laws against adultery in this country, but I still want to say adultery is wrong - it is immoral. I want to be able to uphold that teaching without the law saying to me - no, it is not illegal, so you can't say that. At the moment that's not the case, but the way in which we have seen in other Western Democracies, the coercive effect of changing the definition of marriage has been to restrict people's ability to hold a different point of view. And one of the outstanding points of democracy and human dignity - is the freedom of speech, the freedom of faith and the freedom of conscience. Therefore what the parliament needs to do now, in legislating for same-sex marriage, is to do so in a way which protects people's liberties."