We see them and embrace them

On the final night of the 2009 Synod, the Anglican Diocese of Sydney has passed a resolution embracing the new Anglican province, the Anglican Church in North America (ACNA).

In the words of the resolution "Synod welcomes the creation of the Province of the Anglican Church in North America (ACNA) under the leadership of Archbishop Bob Duncan and notes the GAFCON Primates' Council recognition of the ACNA as genuinely Anglican and its recommendation that Anglican Provinces affirm full communion with the ACNA. Synod therefore expresses its desire to be in full communion with the ACNA.'

The resolution also asks the Standing Committee of the diocese to seek a General Synod motion affirming the national church be in full communion with the ACNA.

In moving the motion, Sydney rector Gavin Poole, who spent time in the US working at an Episcopal Church, spoke of his first hand experience with the liberalism of TEC and paid tribute to what he called ‘the courage of Archbishop Duncan’.

"Canterbury may be blind to them, but we see them and embrace them. Please offer the ACNA your right hand of fellowship" Mr Poole told the Synod.

The motion also asks General Synod Standing committee to note the publication of the Jerusalem Declaration and to encourage its study as a means to Anglican identity and cohesion. 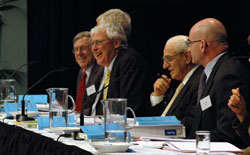 The motion was seconded by Sydney layman Robert Tong who helped in the creation of the province as a consultant to its governance taskforce.

Mr Tong was also at GAFCON when the Jerusalem Declaration was formulated and hailed it as "a clear statement about Anglican identity and coherence and based clearly on scripture."

The resolution also contains a section on the recent Vatican offer to disenfranchised Anglicans.

The motion "Welcomes Archbishop Duncan's assessment that the recent Vatican offer of a Personal Ordinariate "will not be utilised by the great majority of the Anglican Church in North America's bishops, priests, dioceses and congregations' and urges all Anglicans to reject the Vatican's proposal".

The President of the Anglican Church League, Dr Mark Thompson described that as an important part of the statement, even though it was a separate issue to the welcoming of the new province.

"The opportunity of the moment is to forge new understandings with orthodox Anglicans from different traditions " anglo-catholic, evangelical, charismatic - and through a principled co-operation, and the emphasis needs to be on principle, to rescue the denomination from the liberal agenda to which it has been captive for over 50 years" Dr Thompson said.

The motion was carried on the voices in the last hour of Synod.

Parishes to decide on drinking