With just days to go before New South Wales Upper House MP's vote on the Bill which would allow abortion right up until birth, a rally has been told Legislation to outlaw cruelty to chickens was given more consideration.

Thousands of Christians and other opponents of the legislation gathered at Hyde Park  on Sunday afternoon, 15th September, under the banner 'Stand for life, Love them both'.

The Catholic Archbishop Anthony Fisher opened the rally in prayer and it was closed in prayer by Archbishop Glenn Davies.

In between, the protestors stood in every open space in Hyde Park North, listening to speakers from politicians to experienced anti-abortion protestors. There was well over eight thousand people at the rally including Sydney Anglicans, Catholic church groups, Greek Orthodox churches and Armenian community members as well as other faiths. It was clear from TV pictures that it dwarfed the pro-abortion rally the day before. 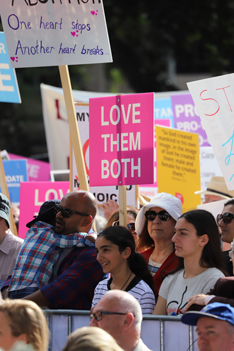 Mr Abbott described the bill as 'infanticide on demand'.

A domestic violence counsellor told the crowd of a woman forced to drive to an abortion clinic by her abusive husband who then was scared off by an anti-abortion protest at the centre.

The woman then movingly revealed that she was the baby that would have been aborted.

The crowd also burst into cheers and applause when Chantelle, a pregnant woman, came on stage and with the aid of a foetal monitor, her baby's heartbeat was broadcast on the PA system.

Finance Minister Damien Tudehope and other MPs mentioned the fact that the bill was rushed through the Parliament with only a brief inquiry - despite fourteen thousand submissions. A bill on cruelty to battery hens drew only five hundred submissions but was subject to a lengthy inquiry. 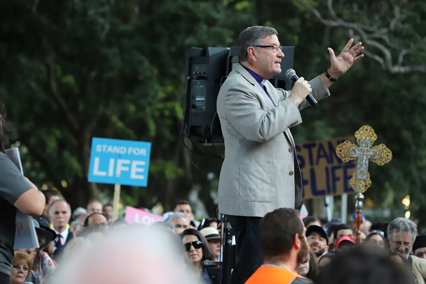 "We have never seen a Bill that has destroyed life like this Bill, in two centuries. Shame upon the Parliament. " Archbishop Davies told the crowd. "We are here today because we believe a child is precious to God, made in his image. Therefore that child is precious to us. We have heard the heartbeat of that unborn child in Chantelle's womb. There are so many other heartbeats which, if this bill goes ahead, will come to an end - ruthlessly, mercilessly and abominably. We must stand for life."

[Prayer] For our diligence in knowing the Bible