Do you see the crowds?

In his first Presidential address to Synod, Archbishop Kanishka Raffel has made a stirring and emotional appeal for visionary planning in the greenfields areas of Greater Sydney.

For the first time in more than a century, the Synod address was given away from inner Sydney at Oran Park Anglican College in the town centre of Oran Park in the Southwest. This week, the Synod will consider a proposal to extend the contribution parishes make to funding land purchases in new areas, for a further ten years.

“I have invited you to Oran Park in South Western Sydney so that you can stand in this part of our Diocese and see the new communities that are coming into existence as we meet,” the Archbishop said. He, along with hundreds of Synod members took part in bus tours of the surrounding areas including the the Nancy Bird Walton Airport site and the proposed city of Bradfield. “I hope you looked out the windows across the rolling green paddocks and empty fields at the places which will become suburbs inhabited by tens of thousands of new residents.” Above: Construction of the new airport terminal

The Archbishop reeled off statistic after statistic about urban growth. “The Bradfield Local Government Area where the new airport will be located will have a population of three hundred thousand in 2036 – 14 years – and as of today, the closest churches are 20kms away at Hoxton Park, Leppington, or Oran Park or Glenmore Park. That would be like having one church between Parramatta and Chatswood, or Miranda and Marrickville, or Hurstville and Cabramatta.”

I am not merely talking about signing people up to Anglican activities. We want them to meet Jesus...

Archbishop Raffel then read from Matthew Chapter 9 “When he saw the crowds, he had compassion on them, because they were harassed and helpless, like sheep without a shepherd. Then he said to his disciples, “The harvest is plentiful but the workers are few. Ask the Lord of the harvest, therefore, to send out workers into his harvest field.”

It was a refrain he repeated at several points during the hour long address, which was greeted with a standing ovation.

“Of course, I am not merely talking about signing people up to Anglican activities. We want them to meet Jesus, to hear his gospel, to repent of their sins and come to him, to know his forgiveness, welcome adoption and indwelling. Things that will not happen unless they engage with Jesus in his gospel and the Spirit convicts and converts them. But I am saying, if we are to do this in new growth areas, we must plan to be present and we must invest in establishing churches and other centres of ministry.”

The Archbishop said the matter was urgent. “As Bishop Peter Lin pointed out in his address to the last Synod meeting, if we do not get in ‘on the ground’ before development plans are settled, we will either be locked out for a long time or need to find considerably more money to enter later.”

The Archbishop foreshadowed Synod discussion of a “diocesan-wide ministry-directed property strategy to serve the mission in the whole Diocese”.

As the Lord asks the disciples to pray for workers for the harvest, will you pray for many more subcontinental, Asian and middle eastern background workers to be raised up from our churches?

He said this had been the unanimous suggestion of nine organisations with responsibility for property interests in the life of our diocese, including Anglicare, the Schools Corporation and Moore College as well as the Growth Corporation and the Property Trust. “This Synod has the opportunity over the next twelve months to express its mind about how consideration can be given to the use of local assets for local mission as well as for mission in the whole diocese where resources exceed expected requirements locally.” 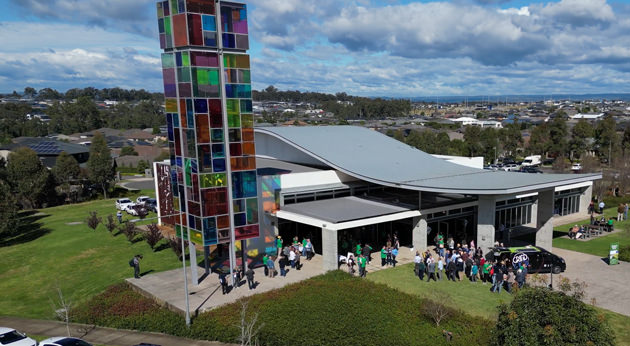 The Archbishop said the population of the new areas was increasingly multicultural. “As the Lord asks the disciples to pray for workers for the harvest, will you pray for many more subcontinental, Asian and middle eastern background workers to be raised up from our churches? And will you support the cross-cultural evangelists employed by Evangelism and New Churches? There are numerous ethnic congregations in our diocesean life – the Nepalese congregation at Liverpool, Sudanese at Quaker’s Hill, Liberian at Whalan, Assyrian and Arabic congregations at Bossley Park and 40 Chinese congregations and ministries throughout the diocese. What a blessing this is!”

Walking together in Indigenous Ministry

After a welcome to country by the Rev Michael Duckett, Archbishop Raffel said the issue of indigenous ministry would be raised at this Synod. “As a diocese, we have slowly taken small steps on the road to genuine friendship, mutual understanding and respect and partnership in the gospel with Indigenous brothers and sisters. This year’s Synod allows us to take another step together, inviting individuals, parishes and organisations to partner in prayer, financially and in other practical ways with Indigenous ministry in the diocese, and developing relationships with Aboriginal and Torres Strait Islander brothers and sisters by walking alongside in partnerships of trust, respect and justice.” Above: The Rev Michael Duckett speaks about his welcome to country

On children and youth, the language was urgent, with the Archbishop saying that in the Greenfields, the projections for growth anticipate that over the next three decades the number of children and youth – people under 18 - will stay between 25-30%. “The discipling of children is both urgent and more necessary and more challenging than it ever has been. And it will take a partnership of families, churches and schools to make it happen. Because children need not only instruction but a community of peers, non-parental role models and mentors (as well as parental models that are consistent and sympathetic) and multiple support structures.”

Will these suburbs be built on aspiration and consumption and nothing more? Can we not offer a gospel of new life, hope, light and love?

On domestic violence, the Archbishop said “I want to say as clearly as I can in this my first Presidential Address, that there is nothing in Scripture which justifies, excuses or permits any kind of abusive or controlling behaviour by a husband towards his wife, or as does occur in far fewer cases, the other way around. The Family Violence survey found that across church traditions most clergy identified that the misuse of Scripture could be an element in the perpetrator’s abusive behaviour and that misunderstanding Scripture often left victims internalising attitudes that meant they remained in unsafe situations out of a mistaken sense of duty to God. I hope you will give it your full attention and endorsement.”

After the recent launch of the Diocese of the Southern Cross, under the auspices of GAFCON and lead by Bishop Glenn Davies, the Archbishop repeated that “the Diocese of Sydney has not split from the Anglican Church of Australia. There are no plans for us to leave. We will not do so. Nor have we provided any funding to the Diocese of the Southern Cross. As you know, on the contrary, we financially support the National Church by more than half a million dollars a year, almost twice as much as any other Australian diocese. But I am glad to extend the hand of fellowship to Anglicans wherever they may be, who seek to be faithful to the Scriptures and our Anglican formularies, and in doing so find themselves unable to accept the leadership of their local Anglican structure.”

He described the Diocese of the Southern Cross as “a pastoral response to the painful reality of division over irreconcilable visions of the shape of the life of obedience.

“Crowds of people from all cultures who will come to Sydney, people who will move into the greenfields, crowds of young people hungry for love and meaning and purpose. Will these suburbs be built on aspiration and consumption and nothing more? Can we not offer a gospel of new life, hope, light and love? Must we not do so?”

1.
How one Church is helping people 970km away
2.
Local love for COVID-ravaged Oakhurst congregation
3.
General Synod calls on MPs to oppose euthanasia
4.
Mission to Menai continues

A model of compassion, faith and selflessness

We see the crowds