Former Test Cricketer Henry Olonga has headlined a series of Anglican Aid fundraisers for water in the third world.

Olonga, Zimbabwe's first black test cricketer, appeared in Sydney and at the International Cricket Hall of Fame on behalf of the Archbishop of Sydney's Anglican Aid 'WaterWorks for a Thirsty World' appeal.

Interviewed by the CEO of Anglian Aid, the Rev David Mansfield, the former pace bowler entranced the crowds with a series of stories from his African childhood, his test career, his Christian testimony and his public stand against the Mugabe regime which cost him his test career and has seen him unable to return to his home country.

He spoke at a breakfast at the International Cricket Hall of Fame, the Bradman Museum in Bowral, where he features in the exhibits. The breakfast was on the 16th anniversary of the death of Sir Donald and just before NSW country took on Canterbury New Zealand in a two-day match on the adjacent Bradman Oval. 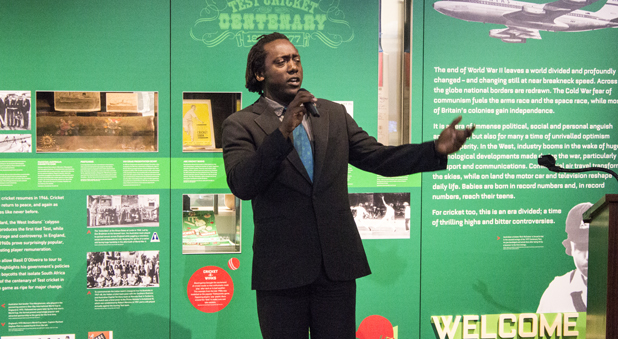 Mr Olonga, who now lives in Australia, is probably the only cricketer also to have had a number one record. He surprised the crowd by revealing a brilliant singing voice and the event finished with a rousing rendition of his own composition, 'Our Zimbabwe' which hit the top of the charts in his home country.

WaterWorks is raising money for vulnerable communities who don't have access to clean water, hygiene and sanitation. Anglican Aid has partnered with schools, churches, organisations and individuals in setting water focused challenges and events to raise money to support vital water projects in impoverished communities.

The appeal has already raised at least 85 thousand dollars.