If there is one image that symbolises the Russian invasion of Ukraine for believers, it is the one taken by a photographer from The New York Times showing the body of church volunteer Anatoliy Berezhnyi lying beside the mother and children he was trying to help escape the fighting.

Almost two weeks after the invasion began, 26-year-old Mr Berezhnyi got his young wife to safety and had stayed behind at Irpin Bible Church in the suburbs of Kyiv, which was sheltering members and local residents waiting to evacuate. The evangelical church has mobilised staff and volunteers to feed, house and help people flee to safety. 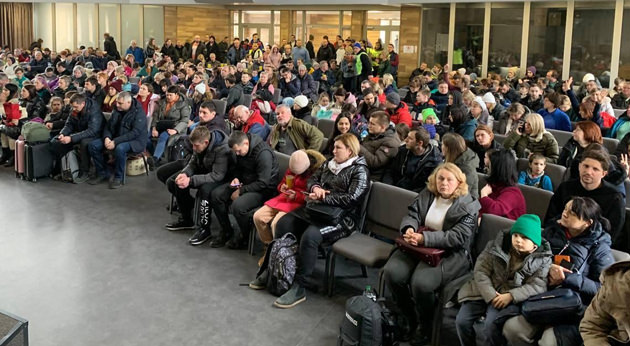 Above: Evacuees wait in the church auditorium

“There are many people who have remained in the city, but there is little food and water, many families do not have it,” said Pastor Mykola Romanuk. “The water supply, electricity, and gas have been cut off.

“We evacuated as much as possible all the people who were hiding with us… a small team remains in the church, serving people from the city who find shelter in the church. And when there is a spare second, they try to help people, mainly the elderly or the sick, by bringing them food, water, and basic medicines.”

There was supposed to be a humanitarian corridor in Irpin where people could go on foot and then be evacuated.

“We experienced the loss and incredible pain – our brother Anatoliy Berezhnyi died,” the pastor said. “He actively served the last three days during the evacuation of the civilian population. Mortar fire caught up with him in the back as he helped a mother with two children get to the evacuation buses.” 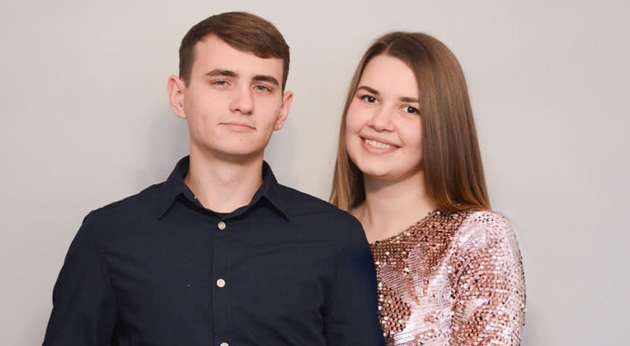 Above: Anatoliy and Diana Berezhnyi

Mr Berezhnyi was on a bombed-out bridge leading 43-year-old Tetania Perebyinis and her two children – 18-year-old son Mykyta and daughter, Alisa, who was 9. They were several hundred metres short of the bus boarding area when an explosion sent shrapnel toward them, killing the family and mortally wounding Mr Berezhnyi.

A New York Times photographer caught the scene as Ukrainian soldiers tried to help Mr Berezhnyi, who died on the roadway. Mrs Perebyinis’ husband and church members saw the photo on Twitter, which is how they were informed of the tragedy. 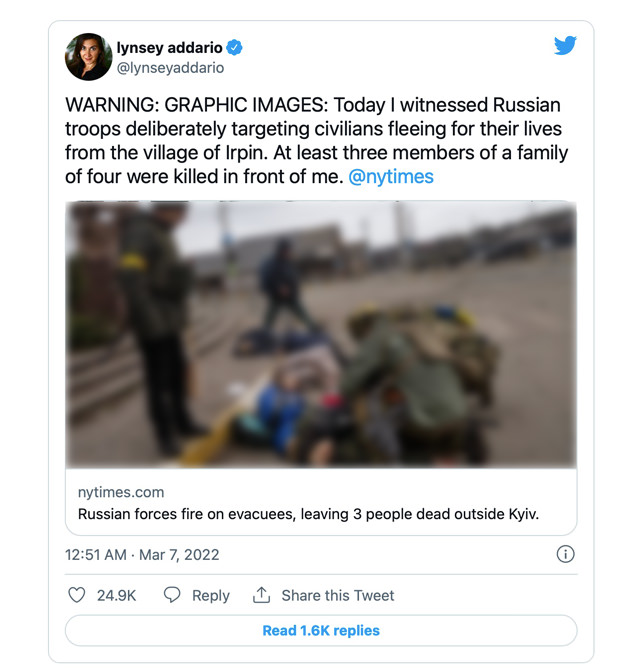 Although many Christian organisations have evacuated staff, others are staying to provide help and spiritual comfort. Northern Ireland missionaries Timothy and Rhoda Sloan work in Lutsk, Western Ukraine.

“Rhoda and I are not leaving – how can we?” Mr Sloan wrote in a prayer letter.  “As an elder, my responsibility is to shepherd at all times. It would be a terrible testimony to get up and leave the Lutsk believers.

“God is about to give us a great opportunity to show our Christian faith practically and reach out into our community with the gospel. As we close, the military jets can be heard overhead and we covet your prayers! We are not any braver than you – but confident we are where God would expect us to be.”

Anatoliy Berezhnyi’s wife Diana says the same for her husband.  “He [was helping] them escape from death, but God had his own plan.”

A Prayer for Ukraine

Sovereign Lord, you observe all those who dwell on earth. Have mercy we pray on those who now suffer the miseries of a war not of their own making. Have compassion on the wounded and dying; comfort the broken-hearted; confound the hatred and madness of those who make war; guide our rulers, bring war to an end, bring peace across the world. Unite us all under the reign of your Son, the Prince of Peace, before whose judgement seat the rulers of the world will give account, and in whose name we pray. Amen.

1.
He is Risen! Now pray
2.
Thousands lift their voices to God
3.
Lessons we can learn from our prayer warriors
4.
A prayer for Ukraine

Worthy of an Emmy or dangerous to our teens?