A former leader of a notorious black African terrorist group is set to hit St Stephen’s, Penrith tonight after a week-long tour of Sydney.

However Mr Lungu will be taking aim with his own powerful testimony, rather than the bullets, bombs and knives that used to be his favoured weapons.

Former terrorist Stephen Lungu, who once planned to blow up a church service at the height of his involvement with the terrorist group, has gone from bombing, shooting and stabbing attacks in Africa to travelling the world to speak of his newfound life of peace.

Mr Lungu has been visiting Sydney churches during October as the Chief Executive Officer of African Enterprise, a worldwide charity which evangelises in Africa and offers food and clothing for the impoverished in a continent torn apart by AIDS. 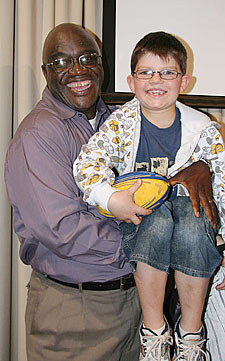 Mr Lungu spoke to the 375 people present at Engadine Anglican Church to thank everyone from the Sutherland Shire who gave towards the $20,000 donated for an orphanage in Malawi.

Mr Lungu says he was humbled to learn of the fundraising the young people of the Engadine Anglican Church had done to raise the money to assist some of Malawi's one million orphans.

Among these was Jess Gaskell, featured on sydneyanglicans.net in May, who asked guests to her 21st birthday party to bring money for an African Enterprise project rather than gifts.

"In recent months people from the Engadine parish have celebrate two 21st birthday parties, a 17th birthday party and a 50th and not accepted any presents. Instead they have raised the money to start our orphanage in Malawi " the fourth poorest nation on earth," Mr Lungu shared.

"At one party alone $4,000 was raised. The youth have used the theme of binge giving instead of binge drinking. This is a great gift."

Stephen Lungu, was converted to Christianity on the very night he planned to petrol bomb a church service in Zimbabwe in 1962.

At the time Stephen, as the leader of the Black Shadows, said to his fellow terrorists "Remember, everyone inside the tent must die. If you allow anyone to escape, I'll give you the gift of a bullet".

When Stephen entered the church service to carry out the violent attack on the congregation members he heard a young girl speaking at the front of the church of her love for her Christian life.

This was the moment Stephen Lungu ceased his violent lifestyle after years of terrorism and walked to the front of the service and turned his life over to God.

"I was without doubt a violent, vicious, emotionally damaged young man but I have been blessed by God and want to tell my story openly to help others change and at the same time provide food, shelter, medical help and protection for the people of Africa," Mr Lungu explains.

Engadine rector, the Rev Rick Lewers, says it was wonderful to have people from all corners of the Shire sitting on the floor, in the aisles and in the church's gym where the service was being beamed by video camera to the overflowing crowd.

"The gathering of people was one of the largest I have seen since becoming the minister in 2005. It certainly is the largest attendance at any event since the refurbished building was opened in 2006," Mr Lewers says.

"Stephen made people laugh and a few moments later cry with his story about how he was once a violent gang leader and today is a Bible-believing man of God helping millions of Africans."

Donald Trump says he now identifies as a ‘non-denominational Christian’

The Panthers star who wears his Bible inspiration on a mouthguard

Episcopal Bishop Love will step down after same-sex marriage fight