Reconciliation and the Rugged Cross

The Sydney leg of a whistlestop tour of Australia by the Archbishop of Canterbury began with a meeting with Indigenous leaders around a campfire in the centre of Glebe.

Pastor Ray Minniecon and the staff of the Scarred Tree Ministry gathered round the Tree in the grounds of St John’s Anglican Church in Glebe and soon had the Archbishop Justin Welby and his wife Caroline singing along with indigenous hymns as well as the gospel favourite ‘The old rugged Cross’.

Reconciliation has been a big theme of the Archbishop’s visit, who has just released a book on the subject.

Above: The Rev Michael Duckett presents gifts to Archbishop and Caroline Welby.

Acknowledging the Stolen Generations, he compared the situation to Canada’s First Nations people whom he had visited earlier in the year.

“Reconciliation starts with Jesus,” the Archbishop told the crowd “and when we are reconciled to God by Jesus on the Cross and he offers us life… God does not give us just enough reconciliation, he gives us oceans of reconciliation and he says let that overflow.” He stressed that actions, not just words, were needed to heal. “We can’t change history - terrible things were done, we must acknowledge it… say it is reality but we can change the future. When we repent as a people and turn, that’s when reconciliation becomes possible.”

The Archbishop presented a special reconciliation award to Pastor Minniecon (see main photo) and accepted the gift of a boomerang-shaped cross from the Rev Michael Duckett, pastor of Macarthur Indigenous Church and chairman of the Sydney Anglican Indigenous People’s Ministry Committee. 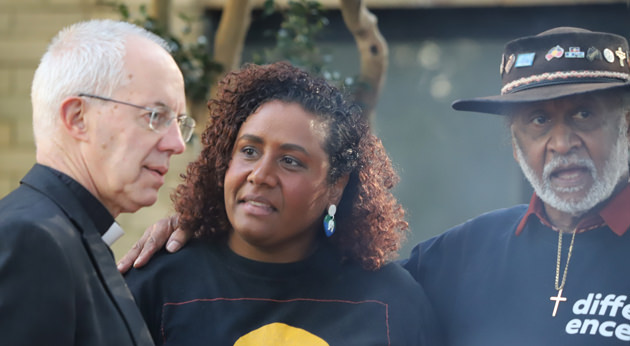 Above: The Archbishop speaks with Pastor Minniecon and his daughter Larissa

After a private welcome dinner with the Archbishop and Mrs Cailey Raffel on Tuesday, Archbishop Welby on Wednesday visited Gawura Indigenous Campus at St Andrew’s Cathedral School and had lunch with students and staff during a tour of Moore College. 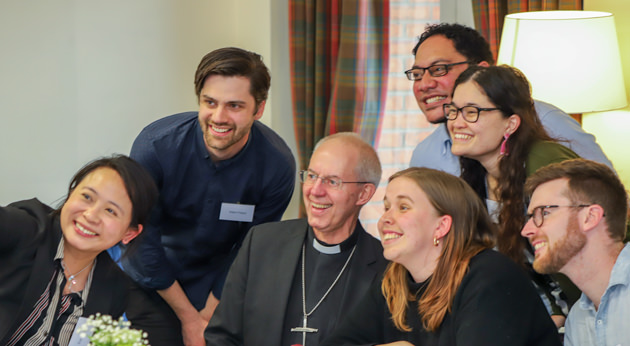 Above: Senior students take a selfie with Archbishop Welby during his visit to Moore College.

1.
Five things to consider as you share the gospel online
2.
The need for Indigenous ministry
3.
From the cockpit of a Globemaster transport plane to becoming an Anglican Chaplain
4.
Pray they might know Satya

Five resources for those struggling with joy