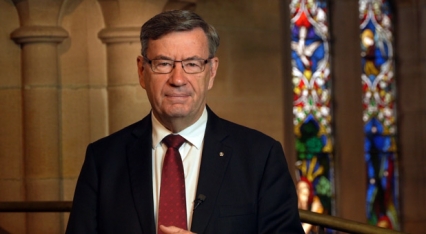 Archbishop Glenn Davies will continue to lead the Sydney Diocese until March next year, after his term was extended in the emergency circumstances of the Coronavirus.

Archbishops must retire at age 70. Dr Davies turns 70 in September and in order to allow a smooth transition had given notice that he would retire two months early, in July. This would have allowed an election Synod in August and the new Archbishop to chair the next Synod in October. The COVID-19 emergency means that the election synod will now not be held as scheduled.

The Standing Committee of the Diocese met on Monday night and voted unanimously to ask Dr Davies to withdraw his resignation to allow him to continue until March 2021.

Several Standing Committee members spoke strongly in favour of the move, saying it would allow stability of leadership through troubled times and help the Episcopal team remain at full strength to care for their regions.

Dr Davies absented himself during the debate and returned to applause as the decision was announced.

"My wife and I have served Christ together in ministry for many years and are happy to continue to serve wherever we are needed," Dr Davies said. "I am humbled and grateful for the support of the Standing Committee. More than ever, I am thankful for the many people who uphold us in prayer."