The Supercoach is in charge

We may be in the middle of a pandemic, but the footy is still on and the finals are – finally – here.

“It has been an exciting, challenging and highly disrupted rugby league season… but throughout the ups, downs and uncertainties of it all, God is still in charge,” says the Rev David Simmons, a former Sharks and Panthers player who is now chaplain to the Panthers and assistant minister at Emu Plains.

And it has been an exciting season. “The game has been a lot more entertaining to watch than in recent seasons,” Simmons says. “The faster ruck speed and six-again rule changes have really opened up the play, and we’re seeing a lot more creative footy – not just the stock-standard plays against robotic defensive lines.”

The Rev Graham Crew, senior minister at Gymea and former chaplain with the Dragons, agrees. “It has been great to have games back on the box and some of the play has been spectacular and brilliant.”

As is the case with all sport, the season has had its usual challenges, with the rise and fall of players, clubs and coaches. On top of this, of course, COVID-19 caused the competition to stall between mid-March and the end of May, and pushed the grand final back to October 25.

In the meantime, strict hygiene protocols have been implemented, with players and key team management going into COVID-19 “bubbles”, game locations changed, and crowds severely limited.

Like all segments of society, the rugby league community has had to deal with the “new normal” and many within it are doing it tough. It’s at times like this that people might be more inclined to seek out the assistance of a chaplain, but the pandemic has also had an impact on Simmons’ role at the Panthers.

“It’s particularly important for a chaplain to be present,” he says, “but this has been made very difficult as I find myself outside of the team ‘bubble’. I have managed to message the players and have received some thankful responses.”

His physical absence from the playing group, however, has not restricted God’s work there. “I have been encouraged by the commitment of about six to eight of the players who get together to pray each week and support each other,” he says. “They can often be seen praying before and after games. My not being there has given them the opportunity to take more initiative and responsibility.”

That said, Simmons’ absence has certainly been felt. The Panthers’ chief medical officer, Dr Scott Reid – a member of Anglican Churches Springwood – is living inside the Panthers bubble and says Simmons is greatly missed. “He has great rapport with the players and is a ‘safe’ person for them to chat to about the issues that concern them.”

He meets periodically on Zoom with other rugby league chaplains, and one thing they have noticed is the impact COVID restrictions have had on club staff. “Some staff have been laid off,” he says, “and those who are outside the team bubble can really feel the loss of the relationships.”

This seems to have opened some up to interactions at a much deeper level and he has found himself in some really good conversations with staff at the Panthers. Again, God is at work.

Understanding God’s sovereignty over events has had a big impact on Simmons’ life.

“A few years back I struggled with how God could be in control when bad things happen,” he says. “But I dug into the Bible and spoke to others at church and came to understand that even in the difficult times God is active. He still loves us and uses each situation to make us more like Christ and to prepare us for eternity. And this is the sort of thing I can convey to the players and staff, where appropriate, as they experience the ups and downs of life inside of and outside of the game.’

[His new faith] started to affect how he played on the field, and what he said and did off it…

Amid the rollercoaster of 2020, God is still working out his purposes. And this has always been the case. His guiding hand is clear in an encouraging story that includes both Graham Crew and David Simmons and spans a few decades.

Back in the early 1990s, Crew became chaplain to the Dragons. “It was great for me as a local pastor,” he recalls. “It got me out from the church environment and gave me the opportunity to rub shoulders with a lot of non-Christian men.”

Brad Mackay was one of those men. One of the younger Dragon players at the time, he was also a State and Australian representative. Mackay fell in love with a Christian girl called Joanne and the two began dating. Before long, Joanne realised she needed to get her Christian life back on track and challenged Mackay by saying that, because he was not a Christian, she couldn’t marry him. He decided he’d better find out something about God.

Having heard that there was a chaplain at the club, Mackay contacted Crew. Before long they were meeting together, and Mackay started attending Crew’s church. Finally, one Sunday evening, Mackay sat and listened to a visiting preacher. The message really struck home, and Mackay gave his life to Christ. This new direction started to affect how he played on the field, and what he said and did off it (Mackay and Joanne also ended up at the altar, and Crew took the wedding).

Someone who noticed was a young man named Jason Stevens, who had just started playing in the Dragons first-grade side. He, too, would go on to play for NSW and Australia. Stevens was very interested in what he saw in Mackay and spoke often with him about his faith. 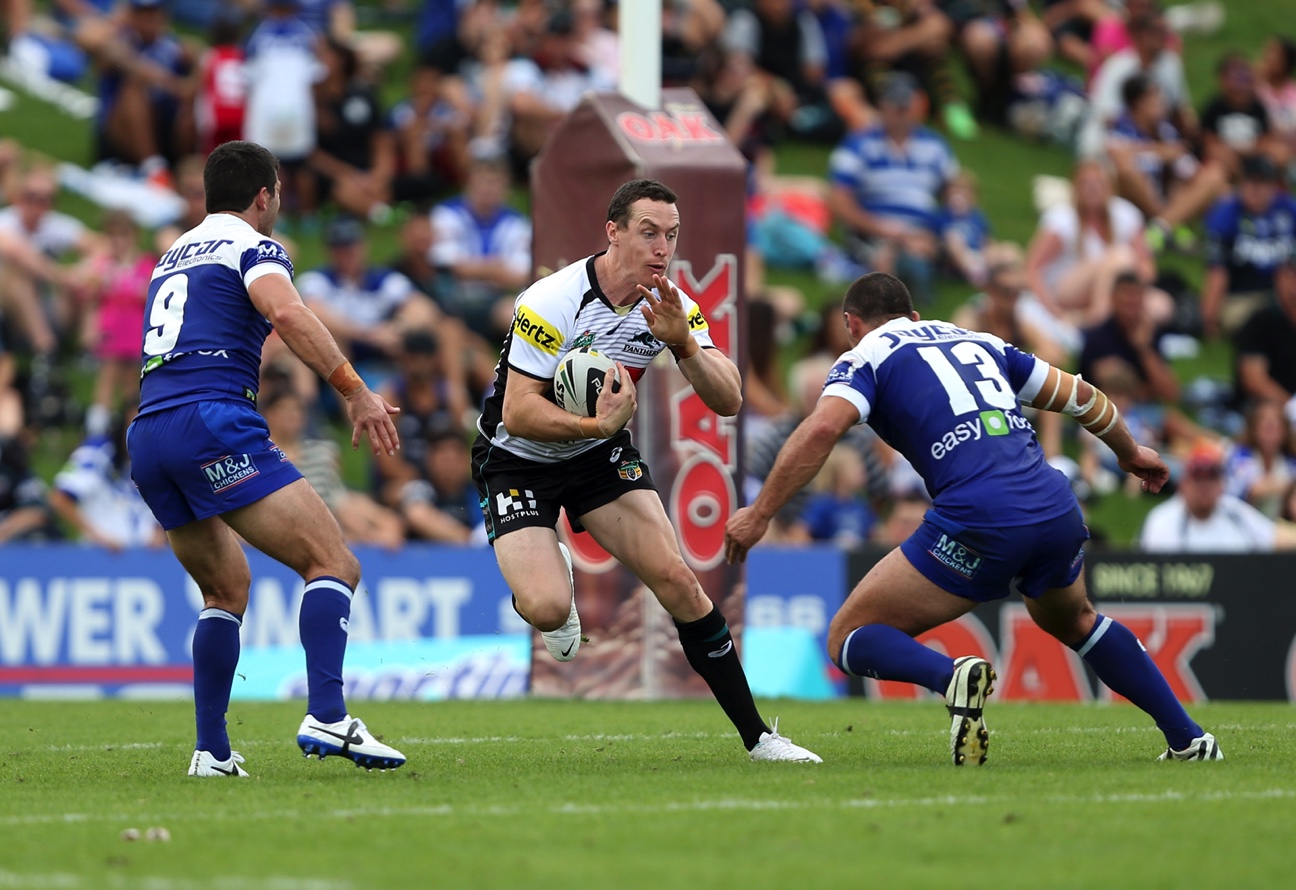 Stevens also got to know Crew, and about a year later found himself in the chaplain’s loungeroom being taken through the gospel tract Two Ways to Live. He, too, gave his life to Jesus. Stevens has gone on to become a prominent public Christian.

Here is where the story links up with Simmons. Stevens had moved to the Sharks by the time Simmons made his first-grade debut as a teenager. Simmons was not only new to first grade; he was also fairly new to the faith.

“I am very thankful to God for Jason,” Simmons says. “He was a great example of how to hold firmly to your Christian commitment in a hostile place. I was young and impressionable at the time and he helped me to stand firm and grow as a believer.”

A number of years later, when he retired from rugby league, Simmons went to Moore College. So, yes, he serves in a parish, but he also chooses to serve part-time as a rugby league chaplain. “I wanted to better equip myself so that I could spend my life telling and teaching others about Jesus – both at church, and in the rugby league community… I was helped so much by older Christians when I was playing that I wanted to do the same for others.”

It’s something of a circle, as Simmons finds himself doing what Crew did all those years ago. God – the true Supercoach – has been working out his master plan.

The finals are upon us and while, sadly for Crew, his Dragons are not in the mix, the Panthers are one of the premiership favourites. Scott Reid notes the very positive culture at the club with a real emphasis on “playing for the team”.

Simmons says the Panthers have taken their game to another level. “They are faster, more confident, and really fun to watch,” he says. “I think they’ll go all the way.”

While many readers will have strong views on who they hope will hold aloft the Provan-Summons trophy on October 25, there are obviously deeper issues at stake. How might we uphold the rugby league world at this time?

Crew and Simmons suggest we pray:

1. that Christian players and staff would live in obedience to God and would have courage to speak about their faith;

2. that non-believing players and staff would hear and respond to the gospel;

3. that Christian players and staff would be satisfied and trust in God as they experience the ups and downs of their seasons and sporting careers;

4. for the safety of the players;

5. for Christian chaplains associated with each club as they seek to provide care, spiritual support and Christian witness to players and staff.

The Rev Stephen Liggins is a senior assistant minister at Anglican Churches Springwood, a former first grade cricketer and author of the recent Matthias Media book The Good Sporting Life: Loving and playing sport as a follower of Jesus – which contains a longer version of the Crew-Mackay-Stevens story.

1.
It’s an emergency! Let’s not get comfortable
2.
COVID shows us something deeper
3.
Never Alone - Using our isolation for the sake of eternity
4.
Synod off, double for 2021

Carols in a time of COVID: livestreaming and the rise of the Christmas party “micro-carols”

Welcomed changes to restrictions in NSW

PA to Head of Middle School/Director of Professional Learning